Optical organ is vulnerable to weapons fire; can temporarily stun creature. Intense heat will kill it.
Reaper Vines are plant-like creatures found on Tallon IV, consisting of large, tentacle-like vines that swing around a scythe-shaped appendage, attacking anything near them. A small eye can be found near the base of the scythe, which, if hit, will cause the vine to retract into the hole in the wall the Reapers grow from. Reaper vines usually move slowly, but when Samus gets close, they will start to swing around wildly, making it harder to hit the eye. A charged Plasma Beam shot will kill a Reaper Vine. They can be seen in the Chozo Ruins. There is an underwater creature known as the Aqua Reaper also found on Tallon IV in the crashed Frigate Orpheon and Phendrana Drifts; this organism seems to be a distant cousin of the Reaper Vine, but more closely resembles a squid's tentacle.

There are two species that are similar in appearance and behavior to the Reaper Vines and Aqua Reapers but are not known to be related: the Darkling Tentacle from Dark Aether and the Whipvine seen on the BOTTLE SHIP.

Reaper Vines can be seen in the Watery Hall, Arboretum, Sunchamber Access and Sunchamber Lobby. 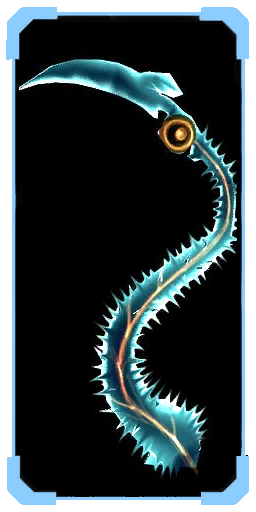 A single eye upon the Reaper Vine keeps a constant vigil, but its vision is limited to 10 meters. A scythe-like appendage on it tip is honed to lethal sharpness. The Reaper Vine will swing this blade wildly at anything that enters its zone of perception.