This article is about the Door shield that can be destroyed by Missiles. For other uses, see Red Door (Disambiguation).

Red Hatches[1][2], also known as Red Doors[3][4][5], Missile Door Locks[6], red gates[7], Red Blast Shields[8], Missile Doors[9] or Missile Covers[10], can only be destroyed using the Missile Launcher. They typically cover standard Blue Doors, and need to be shot once with a Missile (five in all games before Metroid Prime); after that, they will remain destroyed.

Many civilizations have developed their own unique versions of Missile Door Locks; for example, the ones found on Tallon IV and Frigate Orpheon in Metroid Prime only partially cover their Blue Doors, and are mostly grey with three red glowing prongs. Meanwhile, those on Aether in Metroid Prime 2: Echoes are entirely red. The Alimbic race in the Tetra Galaxy have functionally identical Brown Blast Shields.

"These doors open from the impact of five Missiles or one Super Missile."

"Only Missiles will open these hatches."

There is a Blast Shield on the door blocking access. Analysis indicates that the Blast Shield is invulnerable to Beam weapons. Explosive weapons may damage it.

"There is a Blast Shield on the door blocking access.
Analysis indicates that the Blast Shield is invulnerable to most weapons. A Missile blast may damage it."

Red Blast Shields contain high amounts of Brinstone within their metals, and are easily damaged by explosive blasts. Once shattered, the Blast Shield will remain destroyed.

Inhabitants & Eco System of SR388 - Doors (p. 26)
"Undoubtedly a security measure, Red Doors are covered with a red domed force field that can only be opened with missiles. This seems like a strange way to lock a door, but it's certainly effective at keeping intruders out."

A door in Metroid II: Return of Samus

A Red Door from Super Metroid 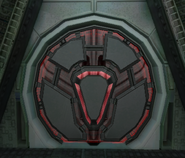 A Red Blast Shield of Galactic Federation design on Norion