The "Red Tower" is a large, tall vertical shaft. It appears in Super Metroid and serves as the entrance to the red soil area of Brinstar. It is connected to rooms leading to the Power Bombs, X-Ray Scope, and Spazer, and is directly connected to both the "n00b bridge" and an Energy Recharge Station. The room can be easily navigated with the Screw Attack, as many of the platforms are made of Bomb Blocks. The column in the background dimly glows with purple light and constantly makes a loud humming noise.

Beneath the entrance are pipes that will indefinitely spawn Geegas. Lower yet is an area that is seemingly the bottom of the room, with only Power Bomb Blocks impeding a Yellow Hatch and a destructible box that contains a Beetom. However, there are Fake Blocks on the ground that reveal a passage leading to the true bottom of the room, a shaft full of Rippers. At the bottom are two doors, on the left is a Green Hatch leading to an Energy Recharge Station, and on the right is a Blue Door leading to more of the area.

Above the entrance is a thinner shaft with platforms made of Bomb Blocks that require the High Jump Boots to reach normally. Near the top of the shaft are many Rippers, and at the very top, part of the floor is a Fake Block that must be shot in order to reach the Blue Door leading to where the first Power Bombs are.

When this room is first entered, the only direction which can be gone is down. At the "bottom", Samus will find herself unable to move on unless she finds and destroys the hidden Fake Blocks in the "floor". Once at the bottom, Samus is unable to ascend the shaft again until she acquires the Ice Beam and High Jump Boots, or uses tricky Wall or Bomb Jumps. Once these items are acquired, Samus will be able to reach the very top of the shaft by freezing the Rippers, allowing her to acquire her first Power Bombs.

On her way back down, Samus will likely use her newly acquired Power Bombs to open the Yellow Hatch that is midway down the shaft, but find herself unable to progress until she has acquired the Grappling Beam. Once she finds that item, she will be able to reach the X-Ray Scope.

When the room is first entered, Samus can Wall Jump to the upper platforms which normally require the High Jump Boots. Once at the top platform, she can proceed to Wall Jump to the top of the shaft to shoot the Fake Block, then quickly Wall Jump back up before it reappears. The Rippers can be killed with Super Missiles to make it easier to climb the shaft. Doing this allows the Power Bombs to be acquired directly after the Super Missiles, far earlier than intended. 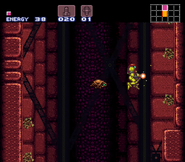 Samus dropping past a Ripper.

The room in SMILE
Community content is available under CC-BY-SA unless otherwise noted.
Advertisement