The red magma crystals are found in Magmoor Caverns and are of interest to the Monks of Grondheim. They possess low Phazon residue and the Space Pirates suggested that they begin mining the crystal once their Phazon operations were complete. They are named in concept art.

In the Monitor Station, several crystals can be seen, a large one protruding from a wall, tiny ones protruding from the ground nearby an exit, and some crystal rock embedded into an enormous rock pillar.

"Local crystal formations possess low Phazon residue. They do have high value to the monks of Grondheim, however. Recommend processing of crystal for that market once Phazon operations cease." 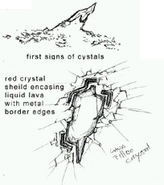 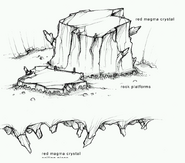