Wikitroid
Register
Don't have an account?
Sign In
Advertisement
in: Articles with non-canonical information, Robots, Zebes,
and 2 more

A Reflec is an unused creature in Super Metroid. Little is known about this enemy, compared to the other unused creatures, except that it can reflect Samus' shots and tend to be stationary, never moving at all. They do not inflict contact damage however. Reflecs' attacks can hit each other as well, and the damage can be stacked to the point where the reflected shot will actually heal Samus. This enemy is fully programmed, and can be set to appear in eight different orientations, one for each cardinal and intermediate compass direction. They were likely originally created to be used as a sort of object for puzzle solving scenarios.[1] Reflecs can actually reflect weapons from anywhere it is hit, including its backside/core. Only when firing directly at its plate will it cause the projectile weapon to reflect in a certain/set direction. Because of its ability to reflect many attacks overall, Reflecs appear to be indestructible.

In the game, it is loaded in RAM into two areas: the vertical chasm in Ridley's Hideout containing the three Red Kihunters, and the small room opened after defeating Kraid containing an E-Tank. The Reflec somewhat resembles the Autom. In some ways they may also resemble the Mirror Arrays seen within Metroid Prime. 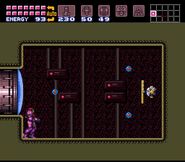 Reflec in a room containing Bang creatures, another unused enemy.