The Repair Drone was a maintenance unit designed to repair parts of SkyTown, but was made obsolete by the Aerial Repair Drone, and production was discontinued over 150 years ago; only the original Drones still remain.

Repair Drones are small robots that move around on one large wheel, tending to the mechanical needs of SkyTown with a single "claw" that contains the various tools for their work. When moving, they can be seen "walking" their tool-claw along with their wheel. It is unknown whether this is their main mode of locomotion, or simply for balance. These drones can be shot by Samus, and while they are harmless, the targeting reticule can circle around them, showing that they can be locked on. Several repair drones of both kinds can be seen tending to Ghor's Armorsuit when it is on the Spire Dock. They, along with the Aerial Drone, are quite efficient sources of supplies, as they tend to drop Energy worth either ten or 25 units. However, since they are no longer produced, destroyed Repair Drones will not be replaced upon revisiting a given room. 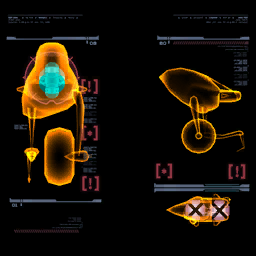 The original version of the Elysian Repair Drone. Because of their limited movement systems, these units quickly proved to be insufficient in performing the necessary maintenance duties. Used as a base design, the aerial model was created to address all flaws with the original version. Made obsolete by the aerial model, all production and manufacturing was halted over 150 years ago. Only a handful of these units remain active.

Retrieved from "https://metroid.fandom.com/wiki/Repair_Drone?oldid=226249"
Community content is available under CC-BY-SA unless otherwise noted.