The Reptilicus were reptilian inhabitants of the planet Bryyo, featured in Metroid Prime 3: Corruption. Though they were once a thriving sentient species, war fractured their society, leading them to devolve into mindless animals.

Although little is known of Reptilican history prior to the Age of Science, their society has been described as a paradise. As they began to learn the ways of science, they initially seemed to have entered a new age of prosperity; the Age of Science saw them venture out into the galaxy, making contact with the Chozo, Luminoth, and Ylla. The Chozo warned the Reptilicus, however, that in order to obtain peace, they had to learn to combine the "Old Ways" of magic and the "New Ways" of science and technology. This warning was not heeded. At some point in time, one of the first Lords of Science, Sfimas, denounced the magic of the Primal Traditions in the Royal City, beginning to heat the two side's tensions towards one another.

The conflict between the Lords of Science and the Primals started in small battles, but escalated to massive wars that ravaged the planet. Scans indicate that the conflicts occurred more than 300 years prior to Samus' arrival on Bryyo. The war scorched Bryyo's skies, and rendered the land polluted and incapable of sustaining life. The Primals fought and greatly outnumbered the Lords of Science, so much so that the Lords of Science soon had to go into hiding. One by one, the Primals hunted down and killed the Lords of Science, until only The Last Lord of Science remained. This Lord of Science dedicated the rest of his life to restoring life to Bryyo, and remained concealed for many years by combining the ways of the old and the new, as the Chozo had instructed the race to do years before. In this time, he also found a successor, a young Prophetess who he found in the wasteland and taught. He continued doing this until an accident exposed him to the Primals, who hunted him down and destroyed him.

Over the years, the remainder of the Primals had devolved into savage and warlike creatures. After the planet was struck with Phazon Corruption, the creatures only continued to devolve until all that was left of them were even more savage beasts. However, they came to possess several new abilities, such as teleportation, invisibility, and resilience against the heat of Fuel Gel.

With the destruction of the Bryyo Seed, the Reptilicus may be able to regain their higher thought processes within a generation or two. Whether or not they will be able to regain what culture they had, even with the degrading effects of Phazon radiation gone, is unknown.

Prior to their devolution, the Reptilicus were an intelligent species, skilled in a form of magic they called the Primal Traditions. With the aid of Bryyonian Labor Golems powered by the magic of the Primals, they built expansive cities of stone. These cities were often adorned with decorative and commemorative statues, typically of emperors or other important figures. Like the Chozo of Tallon IV, the Reptilicus were apparently able to see visions of the future, as they were known to have prophets. The Reptilicus were ruled by emperors and empresses, and also had lords, houses, and clans, possibly implying that they lived in a feudal system. They were known to practice animal domestication, specifically of Warp Hounds, which they apparently continued to do even after their society crumbled.

After the calamitous war between the Primals and Science Lords, Reptilicus culture was all but destroyed. The Science Lords were driven to extinction, with only a few surviving in remote hideaways or fortresses. With the majority of the planet uninhabitable, many Reptilican settlements were left abandoned, and the surviving Primal tribes began fighting amongst each other. The art of magic was gradually forgotten as these wars progressed, and the Primals slipped into barbarism. Those that Samus encounters appear to utilize technology, such as energy whips and throwing chakrams, but these may be scavenged artifacts. Most of the surviving remnants of Reptilican culture were in the form of carvings, left behind by the Last Lord of Science in the hopes that future interstellar travelers would be able to help restore peace to Bryyo.

The Reptilicus' religious views were intended to be placed in the game, but were scrapped due to text limitations. Thus, their views are not canon, but they are as follows:

"From the sleeping chaos awoke the high god. It was he, the Antecedent, the propagator of the genesis, and the eternal body in the sky. In the beginning of creation, the life giving sun created its first child, Bryyo. Upon it’s surface it poured a vast ocean in which the beginnings of life could thrive. The high god then laid down to resume his eternal sleep. From his body, the 23 keeper gods sprang forth as the watchers and caretakers of the world. Within the expansive waters, the children of Bryyo were borne. In their primitive forms, they wandered the currents for eons, becoming masters of the deep. The gods watched this burgeoning life from atop their holy island, where the eternal flames burned within the Garden of Light. When the Reptilicus had dominion of the oceans, the gods granted them access into the divine province, to be one as them, and partake of their knowledge. Given new forms to walk upon the land, they dwelt within the garden for a time. After bestowing their wisdom to the mortal sons of Bryyo, the pantheon ascended to live upon the sun. All departed the celestial first son but one god, Thalyys, who remained as the keeper of the Garden of Light and watcher of the mortals. Arkithun crafted for the gods the City of Glass, wherein the vital light of the high god’s form could eternally penetrate. It was after this that he bestowed the knowledge and gift of architecture to the curious reptilicus, to forge for themselves a civilization. The oceans sank, and the land spread out from the divine island in all directions. The great migration occurred, and the kingdoms and cities spread throughout the world. Having long departed their primordial territory, the Garden still remains at apex of the lands highest mountain, abandoned by all but Thalyys, who tends to it eternally."

This piece of text was created by environment artist Matt Manchester, and was designed to be used in the entry hallway of Bryyo Fire, as scan text for the room's multiple statues. In the released version of the game, the scans of the statues say they are busts of former emperors of Bryyo, not gods.

In terms of weaponry, the bestial Reptilicus are dangerous opponents. At close range they will make a sweeping strike with an energy whip, distorting the visor temporarily.

At longer distances the Reptilicus make use of the chakrams they wear around their necks. Their strikes can be predicted, as they can be heard drawing this throwing weapon. This attack can be avoided by a side dash, or by jumping over the chakram at the right time. They can also create a glowing sphere out of magic and strike Samus with it if she is very close to them. Their most notable trait, however, is their ability to teleport, allowing them to close short distances with their enemies. They will typically teleport to fixed positions on the battlefield if Samus is too far away to attack, but can also sneak behind her this way. However, the sound and light produced when the Reptilicus teleports and reappears usually give away their presence. Reptilicus can leap great distances unaided, suggesting they have powerful leg muscles. However, they occasionally miscalculate a jump across a pit and fall to their doom.

They are resistant to Fuel Gel but weak to extreme cold, possibly indicating that they have adapted to one of the warmer regions of the planet. Likely because of their strong affinity with Fuel Gel, they are immune to the burning effect of the Plasma Beam, but can still be killed if they are fully submersed in Fuel Gel. Until Samus finds the Ice Missiles, Reptilicus can be tough opponents to defeat, especially in large numbers. Reptilicus often use Warp Hounds for assistance, creatures that have been trained to ambush enemies, and that share the teleporting ability of the Reptilicus. Warp Hounds are most often used by Reptilicus Hunters over the standard Reptilicus, indicating that the Hounds are used for hunting purposes as well as guarding.

The Reptilicus utilized statuary in a similar way that the Chozo did, and may even have adapted the technology from the Chozo. The statues they use are known as Bryyonian Golems, and have many purposes, ranging from combat to decoration, manual labor, and even ceremonial purposes. These golems can be equipped with many features including mouth mounted flamethrowers and iceblowers, energy transfer units similar to the Grapple Voltage, and extreme strength. The golems range in size from similar to a Chozo statue to the size of a small mountain. The original power source for these golems is unknown, but most seen in the game can be reenergized with Bombs.

The Reptilicus were apparently able to teleport long distances through Warp Sites, but it is unknown whether this was the result of science or magic. This may be related to the natural teleportation abilities that they were later granted by Phazon corruption.

The Reptilican weaponry seen in Corruption is somewhat primitive compared to that of other known species, though this may be a result of the species' devolution. They appeared to have no projectile weaponry, possibly because they used magic instead. Their weaponry was typically either thrown or wielded hand-to-hand, such as their throwing chakrams and energy whips. These weapons were also somehow charged with electricity, likely through magic.

During the Age of Science, the Reptilicus constructed starships that they used to contact other sentient species. These starships were shaped like massive spheres, with portions of their outermost layer broken off to expose a glowing core. Many of these can be found chained to Bryyo's surface, with more embedded in the walls of the Bryyonian cliffs. 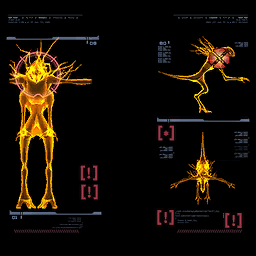 Scans indicate a mutation that allows the Reptilicus to teleport over short distances. Commonly used as a combat tactic to corner and trap their prey. The Reptilicus appears to suffer from Phazon corruption, and all higher thought processes have been replaced by savage bloodlust. This corruption has also increased their resistance to heat-based attacks and Fuel Gel.

GFDF RP-001
"Reptilicus" is the codename that the GF has given to natives of the planet Bryyo. They define themselves as Bryyo'mak, which is synonymous with 'the people of the land'. Their society is in a pre-technological stage, however, there is evidence that this was not always so. We suspect that the Bryyo'mak were once an advanced civilization, until a serious conflict occurred several centuries ago. The associated revolution nearly wiped out the population of Bryyo, which caused a profound hostility to technology in the Bryyo'mak. For this reason, the Federation avoids contact with these people if possible.

"These displays of ceremonial armor were fun to make. I was hoping to imply more culture and ceremony than what was there in front of you, to hopefully get the player into imagining how the Bryyo society might have functioned."

Artwork showing concepts for the Reptilicus.

The room containing the Reptilicus prisoners.

A close-up of the glowing Reptilicus armor.

A Reptilicus is encountered in Bryyo Fire. 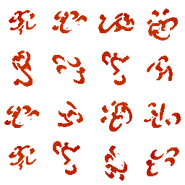