Ice Missiles and can be tracked with X-Ray Visor.

Reptilicus Hunters are a specialized variant of the Reptilicus warriors found on Bryyo. They have been mutated by Phazon, giving them powers that normal Reptilicus don't have.

A Hunter has a much lighter skin tone and a larger, more muscular build than that of other Reptilicus. They have none of the spikes seen on the backs of the other Reptilicus; they also do not share the ability to warp, instead replacing this with ability to turn invisible. They are not hostile to the other form of Reptilicus, and utilize Warp Hounds more often than normal Reptilicus. They are also capable of scaling walls, which allows them to reach higher ledges to attack from.

The Reptilicus Hunter's actual intelligence level is unknown, but their violent and feral nature suggest it is below human levels. Despite this, they seem to actively hunt Samus and ambush her on several occasions. They also display gestures with their arms that could be attack commands in battle. 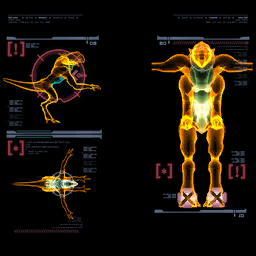 Morphology: Reptilicus Hunter
Target can generate a personal cloaking field around its body.

Phazon corruption has granted Reptilicus Hunters the ability of cloaking themselves. They use this to their advantage and will hide or move positions while cloaked to gain the upper hand in combat. Reptilicus Hunters are fairly organized despite their primitive nature. Usually attacking in small groups, they patiently wait for their prey to become isolated in a locked area before attacking. Their weaponry consists of an energy whip for close-range assaults and a throwing chakram for long-ranged attacks. They have adapted to the harsh climates of Bryyo, and are quite resistant to Fuel Gel and heat-based attacks. 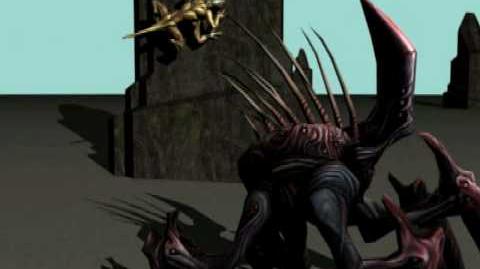 A Reptilicus Hunter in an intimidating stance. 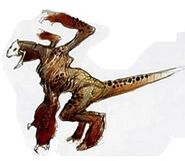