Rezbits are dangerous rogue patrol drones originally designed by the Luminoth, specifically to provide security for the Sanctuary Fortress. They can be found floating along hallways and corridors in the fortress or lodged in nooks and crannies when inactive and attacking when their foe comes close.

Rezbits are curious-looking mechanisms. Physically, they are composed simply of three detached metallic spheres. However, these project around them a cloud of orange holographic panels. The purpose of these panels is never revealed, but they may have served to increase the Rezbit's apparent size (thus intimidating the smallest of the Ing), or to display data about that particular Rezbit or its surroundings. However, since the panels shatter and dart away when the Rezbit is destroyed, they may also be solid objects.

Though the Rezbit may be small, it is not to be underestimated. The Rezbit is one of the most dangerous enemies to be found on planet Aether. It is also very intelligent, chasing its target while moving around walls and obstacles.

Rezbits are sometimes placed by the Luminoth in critical places that heavy troops cannot support due to lack of space, such as in the entrance to Sanctuary Fortress. Rezbits, however, are more often used as general security, and can be found in various places.

Rezbits were designed entirely for combat. To that end, they are armed with a large and varied arsenal of advanced weapons.

The Rezbit's most commonly used weapon is a highly charged variable beam cannon along with a rapid-fire energy cannon. Defensively, Rezbits are able to raise a hexagonal blue shield, blocking all weapon fire, including missiles. This shield, however, protects only their front side. The Rezbit is also able to enter an "energy state", in which it cannot be locked onto, save by using Samus's Echo Visor.

While in that energy state, the Rezbit will use its most unique weapon: a potent computer virus. This virus will utterly incapacitate Samus's current suit, blacking out her Visor, disabling her weapons and forcing Samus to reboot her suit systems. This will render Samus helpless for several seconds.

Using traditional methods to dispose of a Rezbit will take some time and patience. A quick way to destroy them is to either use the Dark Beam's Entangler, and then shatter them using a missile, or use the catch-all method of detonating a Power Bomb near them. Ultimately, however, the most effective method is to simply hit the Rezbit with the Screw Attack, which will make short work of both the robot and its shields. However, this requires a certain degree of accuracy, and is near impossible in small rooms with low ceilings. If a Rezbit comes in contact with an active Kinetic Orb Cannon it will explode instantly.

When fighting mechanoids and enemies using powered armor suits (such as Samus's Power Suit), the Rezbit will use its secret weapon: the Rezbit Virus. After being infected, Samus's Visor will fill with static and random letters and only intermittently display realtime visual input interrupted frequently by display hangups. Her Arm Cannon will shut down, and soon enough her entire system will crash, forcing her to reboot the Power Suit by pressing a combination of buttons simultaneously. If affected by the virus in Morph Ball form, the static and random lettering will not appear, but Samus will not be able to disengage the form or use Bombs.

The Rezbit, though small, is a tough opponent. Its weapon system is potent, capable of firing bursts or beams at targets. A barrier shield blocks oncoming attacks. It can even shift into an energy state to evade enemies: while in this state it can transmit a powerful virus into mechanoids and armor systems. The virus can cripple your systems for a time, leaving you vulnerable. 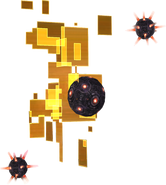 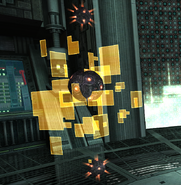