Wikitroid
Register
Don't have an account?
Sign In
Advertisement
in: Pages with sourced titles, Articles with non-canonical information, Rooms,
and 4 more

Ridley's room[1], also known as Ridley's chamber[2], is the room where Ridley is battled in his lair.

In the original Metroid, Ridley's room is constructed from reddish violet blocks, with a few metallic silver pillars. The ceiling of the room features silver spikes and red orbs, arranged in a manner that resembles the teeth and eyes of a large creature; a similar structure appears in Kraid's room.

The room is behind an ordinary Blue Door. Ridley resides on the raised portion of a platform in the center of the room, floating above a pool of lava. Samus Aran can choose to fight Ridley head-on, or she can jump into the lava (which actually deals less damage than the boss himself) and shoot Ridley from below with the Wave Beam.

Directly behind Ridley is the only Purple Door in the game. Shooting it open with ten missiles will reveal a room with Holtz, fake lava, and an Energy Tank.

In Metroid: Zebes Invasion Order, a game book based on the original Metroid, Ridley's room is B-65 and is located in Norfair. The most notable feature of B-65 is a table constructed from lustrous black rocks, located in the center of the room. A Key Stone appears to be on the table, although this is a fake key made from plastic-like material. If Samus approaches the table, the door shuts and traps her in the room, forcing her to use Bombs or two Missiles to escape. Ridley himself is initially nowhere to be seen, but he sneaks up on Samus from behind while she is looking at the table. After Ridley's demise, the door to B-65 is locked permanently.

In the remake Metroid: Zero Mission, Ridley's room is found in the same place as the original game, but its design has been notably changed. The room is constructed from sand-purple blocks, with large columns of ancient temple ruins in the background. The room has a much higher ceiling than before, with the creature-like decorations completely absent.

When Samus Aran first enters the boss arena, she finds that it is completely empty. Without interference, she can cross a bridge over lava and enter the next room, which contains the unknown Gravity Suit and an Energy Tank. However, when Samus returns to this room, the doors lock, trapping her inside. Ridley swoops down from above, and as the boss battle begins, the ends of the bridge crumble away, exposing the lava on either side of the chamber much like the original game.

In Super Metroid, Ridley's chamber has aspects of both the original Metroid room and the later Zero Mission room. It retains the aesthetics of the room from Metroid, including the silver pipes and the creature-like decorations on the ceiling. It also has the greater vertical height of the Zero Mission room, as well as the pillars and ruins in the background. Additionally, several gargoyle-like statues resembling Chozo heads are situated near the top of the room.

When Samus first enters Ridley's chamber, the room appears dark and empty, only for Ridley to emerge from the shadows in the same manner as he did in the Ceres Space Colony. As Ridley roars and the battle begins, the chamber's background fully lights up as an earthquake floods the bottom of the room with scalding-hot lava that will damage even the Gravity Suit. The lava level rises and falls slightly throughout the battle. Upon Ridley's death, the chamber shakes again and the lava seeps away.

With Ridley finally killed, Samus can enter the adjacent room to the left. Unfortunately, she discovers that she is too late to rescue the baby, with its broken Metroid capsule left behind. However, like Metroid and Zero Mission, this adjacent room still holds an Energy Tank.

Page 42
"When you enter the chamber, Ridley begins firing balls of flame. Make sure your energy tanks and missiles are filled up. Two methods of attack can be successful. Using the Wave Beam, manuever beneath Ridley's platform and fire upwards. Keep jumping to reduce the damage. The other method is to use missiles from point blank range or near the door."

174 unknown item #3 (pg. 66)
"When you enter Ridley's room for the first time, the place will be empty. Run left into the next room and collect an Unknown Item from a Chozo Statue.

176 ridley (pg. 67)
"Returning to Ridley's room, run to the right but stop short of the platform's last support. After a quick cut scene that shows Ridley's descent, the platform between the support and the hatch ledge will break." 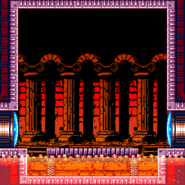 Ridley in his room in Super Metroid.

The room, as seen in SMILE.