Boss Mid Chozorobotsoldier
Robot Chozo Soldiers[1][2][3] (ロボット鳥人兵士?)[3] are Chozo-like battle automatons created by the Mawkin tribe. They were found on ZDR under the control of Raven Beak, appearing as mini-bosses several times to ambush Samus.

Robot Chozo Soldiers can be seen in assembly throughout the background of the E.M.M.I. Zone in Cataris. They were presumably made as replacements for Raven Beak's organic Chozo Soldiers, required for their immunity to the widespread X pandemic. Raven Beak orders one to assassinate Quiet Robe after the latter divulges important information to Samus and deactivates the E.M.M.I..

A Robot Chozo Soldier possesses thrusters that grant it great mobility, though it slows down significantly to Spin Jump vertically between platforms. It is equipped with an Arm Cannon on one hand and an arm-mounted electromagnetic blade[3] reminiscent of a Space Pirate scythe on the other. The Arm Cannon can fire in bursts or a single, more powerful charged shot. When the electromagnetic blade glows red with sparks, its melee attack covers greater range; if the blade glows blue, it can be Melee Countered by Samus, momentarily stunning the Robot Chozo Soldier.

When battling Robot Chozo Soldiers, Samus should frequently move between platforms and elevations, forcing them to waste time jumping or falling after her; this is especially important in the twin Robot Chozo Soldier battles. She should be careful when attacking the robot while it is preparing an attack; it can vary the timing on its regular shots and red blade attack to make them less predictable. Its blue blade attack can be provoked by sliding under a charged shot while the foe is on the same platform as Samus. Once the Storm Missile is acquired, it can deal massive damage if Samus can line up three target locks; two full salvos will be enough to finish a silver Robot Chozo Soldier, while about five salvos can take down the golden variant. She can quickly destroy a Robot Chozo Soldier with two Shinesparks.[4] The Screw Attack is also effective against Robot Chozo Soldiers, but it will hurt Samus as well due to contact damage. Finally, a Power Bomb will incinerate any Robot Chozo Soldiers caught in the blast.

Upon its defeat, the Robot Chozo Soldier explodes while releasing Energy Capsules and Missile Ammo. This explosion is simply a visual effect, since it does not damage Samus if she is caught in its range.

"Samus must also face these combat robots created using advanced Chozo technology. They are powerful forces to be reckoned with, capable of high-speed movement and armed with an electromagnetic blade as well as an Arm Cannon that fires projectiles." 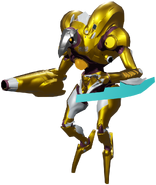