Connects Crateria to Brinstar and Tourian

The rocky cave[1] is a significant room in Crateria. It made its first appearance in Super Metroid, although chronologically it is first seen in Metroid: Zero Mission.

The rocky cave consists of an uneven horizontal tunnel, with a pair of natural rocky shafts extending downward on the left and right sides. The rocky cave is found directly to the left of Samus's Gunship, and proves to be essential in traveling between Crateria's landing site, Tourian's escape shaft, and Brinstar's Corridor No. 1.

During Samus Aran's Zero Mission, the rocky cave is completely uninhabited. It is implied that Samus first passes through here while monologuing during the game's introduction, although this walk would occur when the screen fades to black and therefore is not visually seen. Her first passage through the rocky cave is suggested by the room's right shaft leading directly to the Starting Point of Corridor No. 1, where the screen fades back into view with Samus already in it, marking the start of her mission.

Samus later returns to the rocky cave through the lower left corner while escaping the imminent destruction of Tourian. She ascends the left shaft and has to break several barriers with her Beam to reach the landing site. During this time, a cave-in has occurred in the lower right shaft, with boulders now blocking its passage. After receiving the Fully Powered Suit in Chozodia, Samus can return to the rocky cave to access the ruins of Tourian. She can also break through the aforementioned boulders with a Power Bomb to return to Corridor No. 1.

The rocky cave plays a much greater role during the Raid on Planet Zebes in Super Metroid, and is the first room Samus enters after landing her ship on Zebes. At first, the rocky cave appears desolate, with only a few Sbugs that are spooked by Samus's presence. Starting with only her basic Power Beam, Samus can only access two Blue Doors at first (with one leading quickly to a dead end), but many more paths and doors quickly open up to her as she acquires her Morph Ball, Missiles, and Bombs. After returning to the rocky cave from the ruins of old Tourian and Brinstar, she finds the tunnels swarming with Geemers, Rippers, and Skrees.

Just like in Zero Mission, Samus's escape from the exploding Tourian in Super Metroid brings her through the rocky cave, which is now uninhabited once again. She has the option to detour through the right shaft to rescue the Etecoons and Dachora before returning to the landing site.

210 CLIMB AND CONQUER (pg. 76)
"After you emerge from the shaft, you'll still have a good distance to cover before you're free and clear. Jump onto the planet's natural ledges to reach the surface level, then blast through a series of walls as you run to the right."

276 RETURN TO TOURIAN (pg. 89)
"Your item-collecting travels will take you to Tourian next. Run left, blasting barriers as you go, then drop through a long natural shaft and use a Super Missile to break through a green hatch. Continue left to the Tourian elevator."

281 BEGIN AGAIN (pg. 91)
"Climb up the rock shaft, move right and detonate a Power Bomb at the reddish boulders. You'll carve a path to Brinstar - where you started your adventure." 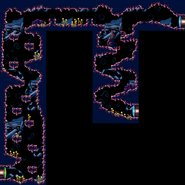 The door to old Tourian in Super Metroid

Geemers in the rocky cave in Super Metroid 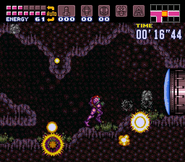 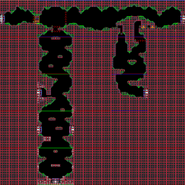 The room, as seen in SMILE.