Wikitroid
Register
Don't have an account?
Sign In
Advertisement
in: Pages with sourced titles, Characters, Bosses,
and 3 more
English

Top of the ruins, Chozo Ruins

The Ruins Test[2], also referred to as the God of War (大軍神?)[1][3] and spirit of the mural (壁画の精霊?)[1], is a boss that appears in the Chozodia Chozo Ruins in Metroid: Zero Mission.

Before the battle, a cinematic shows what appears to be a younger Samus Aran viewing the same wall paintings shown during the boss battle, revealing that she has visited the room while living with Old Bird and the Chozo. As a child, Samus made a small engraving on the base of the mural, depicting herself and two Chozo (most likely Old Bird and Gray Voice). Samus later revisits the Ruins Test as an adult during her Zero Mission, after infiltrating the Space Pirate Mother Ship in her Zero Suit.

The Ruins Test appears as a ghost-like entity representing a Chozo warrior wearing a variant of the Varia Suit. The entity holds a floating orb containing alternating images of either Samus or a hieroglyphic-like symbol. The Ruins Test can only be damaged while its sphere is showing the symbol; if it is shot while displaying Samus, she will take damage instead.

Shooting the symbol once will cause the entity to move around the room in a circular fashion and attack with lightning if Samus stands still. After shooting it a second time, the entity will move along the walls of the room. When shot three times, it will always summon lightning, which now travels along the ground and walls. The entity will move faster with each successive shot, and the window to shoot the symbol gets smaller. Shooting it a fourth time will end the fight.

After its defeat, Samus obtains her Fully Powered Suit, regaining her power suit with the three Unknown Items collected throughout the game being revealed to be upgrades; specifically the Gravity Suit, Plasma Beam, and Space Jump. Upon leaving the room, it becomes sealed off and cannot be accessed again for the rest of the game.

"When you advance to the extreme edges of the Chozo Ruins, you'll take a test that will reveal Samus's connection to the Chozo and give you the Fully Powered Suit, which turns all three unknown items into functional upgrades."

Yoshio Sakamoto: "For Samus to remain connected with the Power Suit requires mental energy unfathomable to an ordinary person. In situations like this when she is under pressure, indeed, even Samus is unable to concentrate her mental energy. However, when Samus completes the trial of the spirit of the mural (God of War), she regains her strong force of will and can successfully integrate with the Legendary Power Suit."[1]

A rare Japanese GBA SP has Samus's drawing inked onto it. 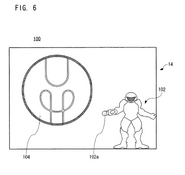 Image from a US patent ((US Pat. 11046707) filed by Yoshio Sakamoto and Katsuya Yamano concerning the Ruins Test fight. Samus is seen wearing the Power Suit in these drawings. 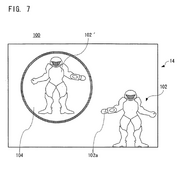 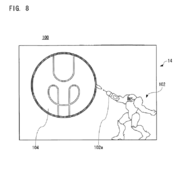 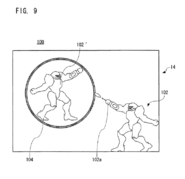 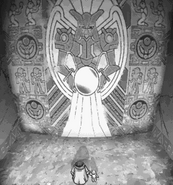