Terminated by his own abilities on planet Bryyo

Rundas was an ice-wielding Bounty Hunter who debuted in Metroid Prime 3: Corruption. He is voiced by Christopher Sabat.

Rundas was born on Phrygis, a moon of the planet Bes III known mainly for ice mining. Phrygisians are commonly able to manipulate and generate ice. However, Rundas was one of very few to use this ability as a Hunter.

A Contract from the Federation[]

Rundas, along with Ghor, Gandrayda, and Samus Aran, was called to the G.F.S. Olympus, the flagship of the Galactic Federation Fleet orbiting the planet Norion, a major GF military stronghold. They were all tasked by Fleet Admiral Castor Dane of the Galactic Federation to purge the Aurora Units of a virus believed to be of Space Pirate origin, and also to investigate Pirate activity in the system. The briefing was interrupted when Aurora Unit 242 sounded the emergency alarm as a Pirate fleet emerged from a wormhole and began a surprise invasion on Norion. Rundas and the other hunters were ordered by Dane to get back to their ships and aid in the battle on the planet's surface. Rundas was forced to battle through boarding Pirates to reach his gunship.

When Rundas and the Hunters arrived on Norion, they found that the Pirates knocked out the generators that powered the planetary defense system. The hunters were ordered to bring them back online.

Amid the chaos, Rundas came to Samus' rescue, quickly and single-handedly destroying four Space Pirate ATCs that had surrounded and trapped her on Cargo Dock A. He informed her that the Federation was allowing all hunters to use their ships' Command Visors during the attack and then told her to go on and activate Generator A while he went to take care of Generator B. Rundas completed his portion of the mission and contacted Samus again to offer her his assistance in reactivating Generator C, but became preoccupied with Pirate reinforcements.

Despite this, he did manage to arrive just in time to rescue Samus once again before she plummeted to the bottom of Generator C's Shaft after once again defeating Meta Ridley, flying down after her using his cryokinetic abilities. When he brought her back topside, he remarked that she now "owed him one", before traveling to Norion's Control Tower while she finished the process of activating Generator C.

Once all of the generators were online, the four hunters reached the Control Tower and began the firing sequence of Norion's main planetary cannon in order to prevent the approaching Leviathan from impacting the planet. While in the elevator, he also reassures his comrades that they are the good guys, and that justice will prevail. However, Dark Samus arrived to stop them, crashing through the tower window and firing Phazon blasts at them. Rundas was hit by one, but recovered quickly. Before he and the hunters could retaliate, Dark Samus unleashed a powerful burst of Phazon energy that rendered Ghor, Gandrayda, and himself unconscious. Samus still managed to activate the cannon, saving Norion before falling unconscious herself.

Two weeks later, Rundas awoke to find that, due to Dark Samus' attack, his body was self-producing Phazon with no apparent negative effect. The Federation had given him a Phazon Enhancement Device during his stupor so that he might harness and use this Phazon. Once he was briefed on the effects and abilities of his PED, the Federation sent him on a new mission to the planet Bryyo to destroy its Leviathan. He easily dispatched any of the corrupted Reptilicus that stood in his way. Over time, however, his cryokinesis became increasingly Phazon-based, until he lost all control of the Phazon inside of his body and was apparently corrupted by it himself one week following his awakening, making it easy for Dark Samus to assert control over him. The Federation lost all contact with Rundas after he succumbed.

After his corruption, Rundas apparently became a Space Pirate commander, perhaps overseeing the defense of the Leviathan, its shield, and that shield's powering generators. The corrupted hunter's true role during this period, however, remains unconfirmed.

One week later, Samus awakened as well and was dispatched by the Federation to Bryyo to investigate Rundas' disappearance and finish his mission. Rundas began observing her from afar, but made little effort to conceal his presence from her, as if intending for her to follow him. He even left his gunship in plain view on Bryyo Fire with its engines still warm.

Navigating through Bryyo Fire's Fuel Gel pumping and processing centers, Samus eventually found Rundas in the Gel Processing Site, staring down at her from the chamber's highest ledge. Without a word, he walked away. Samus proceeded to follow him until she was attacked by Space Pirates within the Temple of Bryyo. When they began to get the upper hand, she was seemingly rescued by Rundas, who froze all of the Pirates within seconds. When she approached Rundas, however, he attacked Samus as well.

Despite his abilities, Rundas was defeated by Samus, who ripped off his armor with her Grapple Lasso and subdued him. He collapsed to the ground, breathing heavily, and appeared to be confused, frantically looking around as if unaware of what had happened. Rundas noticed Samus and, recognizing her, raised his arm. Before the other hunter could respond, however, a large stalagmite of ice erupted from the ground beneath Rundas, impaling him and killed him instantly. Afterward, Dark Samus arrived in an immaterial form to absorb his remains, as Samus was forced to watch.

When the corrupted Gandrayda later engaged Samus, the shapeshifter occasionally took "Rundas' form", and imitated his attacks, albeit with electricity-charged ice projectiles.

After Samus destroyed Phaaze and purged all Phazon from the galaxy, she took some time on planet Elysia to mourn Rundas and her other fallen comrades.

Rundas was generally easygoing, with a dry sense of humor and penchant for showing off even in the direst of situations. As Phrygisians do not usually become bounty hunters, Rundas was something of a rarity, who greatly enjoyed his work, to the point that he kept trophies of every target whom he had successfully captured or killed in his career. However, Rundas' pride also made him cocky and arrogant, causing him to believe himself unmatched in his field. This was evidenced by his remark that the Space Pirates' overwhelming of the G.F.S. Valhalla "never would have happened" had he been present. This arrogant demeanor led him to primarily seek solo missions, and he rarely worked with others.[1] Despite this, he was shown to have a sense of camaraderie, particularly toward Samus Aran.[2]

After succumbing to corruption, Rundas' behavior changed completely: In place of his casual, cocky attitude, Rundas became unrestrained and violent, and lashed out with increasing savagery during his battle with Samus. Also worth noting is that, despite his usual propensity for dry quips, Rundas was the only corrupted hunter to never utter a word when Samus faced him. The reasons for this remain unknown, though it is possible that Dark Samus needed to impose more direct control over him than the other two hunters she corrupted. Interestingly, the arrogance he had shown throughout his lifetime seemed to have persisted even when under the influence of his internal Phazon, as he seemingly killed his newfound Pirate comrades simply to fight Samus alone on Bryyo.

As a Phrygisian, Rundas demonstrated his species' cryokinetic ability to generate and manipulate ice. He was known to surf through the air by jumping up and continuously forming ice at his feet in front of him, and proved to be quite maneuverable while doing so. There appeared to be no foreseeable limitation to his ability, nor did he require any water source, for he could create ice even in warm environments such as Bryyo Fire.

In battle, he could fire ice bursts similar to those of Samus' Ice Beam to freeze his foes (even exhibiting the same noise). These bursts were powerful enough to render Space Pirate ATCs inoperable mid-flight. He could form ice pillars and walls to hinder or trap quicker targets. In addition, he could form ice chunks of varying sizes and lob them at his enemies. Otherwise, he could send winding lines of ice after them, freezing them instantly. As a secondary weapon, he carried Ice Missiles for use in disposing of his frozen victims.

Rundas could also form a thin layer of ice armor to grant him some light protection in longer engagements. It was durable, save at the neck, from which it could be pulled off with enough force.

Rundas was also shown to be a quick, if somewhat awkward, sprinter when he needed to be.

Subject is a native of Phrygis, a moon of Bes III known primarily for ice mining. The Phrygisian ability to manipulate and generate ice has come in handy in subject’s career as a Bounty Hunter. Intel suggests that he enjoys hunting, to the point where he keeps trophies from all of the targets he’s successfully captured or killed in his career. Subject is proud, cocky, and arrogant, and considers himself without rivals in his field. 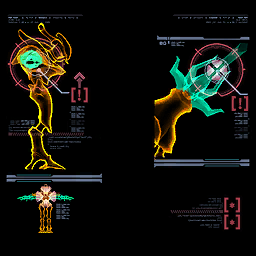 Hunter Rundas
Possesses the ability to generate and manipulate ice.

Rundas is capable of generating and manipulating ice. This trait is common among inhabitants of the moon Phrygis, but Rundas is one of the few who have used this ability for bounty hunting. Subject is known for getting results, but considers himself without peer. His arrogant demeanor has led him to mainly seek solo missions, and rarely works well with others.

Reported to have gone missing during a Federation mission.

Morphology: Rundas
Ice armor protects body, but could be ripped off if he was stunned.

Rundas is temporarily stunned.
Ice armor can now be ripped off if pulled with enough force.

Phazon exposure has greatly enhanced Rundas and his ability to generate ice, making him deadly at any range. His durable ice armor has one weak point--the neck. Serious physical stress can weaken and remove it, exposing Rundas to attack. This weak point cannot be seized as long as Rundas is active. He can create frozen objects at will, and can freeze Missiles in midflight. Smaller ice-based projectiles can be shot down, but it is recommended to evaded larger attacks. Be advised: Rundas can trigger a Hypermode state, elevating his threat level to match your own. 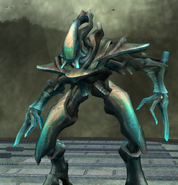 Rundas as seen in the 2006 prototype of Corruption. The only significant difference from his final incarnation is a slight yellow tint.

Rundas in his ice armor.

Rundas is thrown to the ground after the battle.

Rundas is absorbed by Dark Samus.

Rundas leaves behind the Ice Missile for Samus. 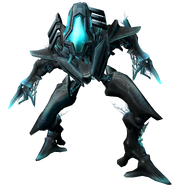 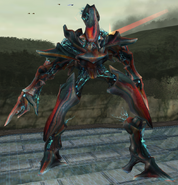 Rundas from the 2006 prototype, in his Phazon-corrupted form. His PED device is notably absent, and his skin has red reflections rather than the usual blue. For unknown reasons, Rundas defaults to this form immediately after his introductory cutscene finishes, possibly indicating that his scripting for the scene was unfinished.