Rocky terrain, caverns, and Chozo Ruins. Homeworld of the Metroid species, the X Parasites and mining colony for the Thoha tribe of Chozo.
SR388 as designated by the Federation and Ili Agar Nalima by the Chozo,[note 1] was a planet that was explored by Samus Aran during Metroid II: Return of Samus and its remake, Metroid: Samus Returns. It was then briefly visited again in the opening of Metroid Fusion, before the rest of the game takes place on the Biologic Space Laboratories research station which orbits the planet.

The planet was of great significance due to the fact that it served as the homeworld of the Metroid species. As such, it was referenced numerous times throughout the series, including in the original Metroid's manual. It was later discovered that the X Parasites were native to the planet as well.

The planet's coordinates are given as 371° / 012° / 02° in the Samus Returns introduction, observable on Samus's Gunship monitor.

The barren surface of SR388 was notable for its rough, rocky and dry terrain (possibly as a result of earthquakes), with a green-tinged atmosphere that was possibly toxic for humans, who were never seen without protective suits while exploring the planet. Severe storms were observed in the planet's sky, which made conditions even harsher for life.[1] A vast majority of SR388's local fauna thus made their homes in the vast maze of tunnels and caverns beneath the planet's surface, with occasionally coming to the surface in search of food.[2]

The interior of the planet is also home to a vast complex of buildings - all that remains of the ancient Chozo who once inhabited the planet, but abandoned it after their bio-engineered Metroids started evolving and turned on them. According to the 11th Chozo Memory, these same Chozo were later killed by others. Most of the Chozo colony's buildings have long since deteriorated into ruins, and range from crumbling temples to vast mining complexes. Many robots and drones left by the ancient civilization are still functioning during Samus' mission on the planet, but most of these synthetic beings had seemingly gone rogue since then and display high aggression against her. One of them is the Diggernaut, a rogue, gigantic robot originally used for mining operations. Incidentally, Chozo Statues and weaponry can be found amongst the ruins.

A unique quality to the planet is the presence of Aeion energy. While it is evident that Aeion is found within all native lifeforms of SR388 and can be collected from their deceased bodies, it is later implied that the energy is initially produced by the planet itself as a form of natural radiation; several Chozo Memories feature rays of golden light (matching those from Aeion) emanating from fissures on the ground deep below the surface of SR388. Aeion energy has several uses, the most notable being fuel for the gauge which powers four mysterious artifact abilities.

In Metroid II: Return of Samus, an odd liquid on SR388 blocked off many of the underground caverns and ruins. The planet was described in various sources as being unstable and prone to earthquakes. In the game, these frequent earthquakes occurred and when they did, it usually happened in conjunction with the liquid level decreasing, often-times exposing new areas of the planet to be explored. These earthquakes coincided with Samus exterminating a certain amount of Metroids; the reason behind this link is never explained and left up to interpretation.

In Metroid: Samus Returns, this liquid is now a purple hazardous one which would be lowered when Metroid DNA was inserted into the Chozo Seals. One of the Chozo Memories and the Official Guide state that the seal was built in order to somehow contain the Metroids within SR388 after the artificial lifeforms started rebelling against their creators. Much more traditional lava, as seen in Sector 1 (SRX) of the BSL, is still present in superheated areas of SR388.

Based on the cutscenes seen in Metroid Fusion and Metroid: Samus Returns, an asteroid belt appears to be in close proximity to SR388, possibly caught in its orbit. In the latter game, the planet's star which illuminates it can be seen in the distance, as well as what appears to be a black hole with a line of matter erupting from both sides. A neighboring planet unofficially designated as "SR387" is seen in a wire-framed map of this solar system.

After the Metroid species was rendered extinct on the planet by Samus Aran in Metroid II and its remake, the Galactic Federation constructed a massive space station out of an asteroid that orbited near SR388.

This facility was used to observe, research and study animals from SR388 and various other planets. Specimens from the now-destroyed BOTTLE SHIP were also brought in; unlike the prior ship, the B.S.L. was allegedly intended for peaceful, scientific purposes. Within the station were six sectors; five of these were constructed to emulate specific climates and housed the organisms that best suited each of them. A single sector called SRX would be entirely dedicated to replicating SR388's environment and causing Metroids to evolve.

The sector would be home to not only the animals captured on SR388 by the Biologic's research team, but also the Metroids created within the station's Restricted Laboratory. Interesting to note is the presence of nest-like structures from which Hornoads, a species native to SR388, continuously spawn from. Although these structures are never seen by Samus on the planet itself, they can be assumed to be a natural occurrence due to SRX being a replica of the SR388's environment.

The events of Metroid Fusion mainly take place on the previously mentioned Biologic Space Laboratories research station orbiting the planet. SR388 is only briefly visited by Samus in the game's cutscene introduction when she accompanies the Biologic's research team to protect them from hostile lifeforms as they collect samples and specimens.

It is during this visit that Samus becomes infected with an X Parasite (more specifically, a Hornoad-X after being shot with a Missile), leading to the events of Metroid Fusion where an outbreak would spread out in the B.S.L. station. Samus was ultimately forced to change the station's orbit and crash it into SR388 in order to eradicate the X on both the station and their native world.[3] Thus, the former home of both the Metroids and the X Parasites was destroyed in a giant explosion.

There are a variety of animals on the planet, the most well-known being Metroids who are at the top of the food chain. Originally, the X Parasite was the most prolific of SR388's fauna and had reached a point where they endangered all other life on the planet. The Chozo of the Thoha tribe that colonized the planet were attacked by the X when the latter were discovered; becoming fully aware of their potential threat outside of SR388, they genetically engineered the Metroids to be the perfect predator of the X Parasites. However, when the Metroids began molting into larger, more powerful forms that could no longer be controlled by their creators, the Chozo flooded their own cities with an extremely hazardous liquid. When this was not enough, they made plans to destroy the planet but were betrayed by the Mawkin tribe before they had the opportunity to carry them out.

Despite this, the Metroids seemingly kept acting out their primary function of hunting down X Parasites, reducing the latter's numbers to an extreme scarcity. This helped SR388's other native life and flora to expand, though they would come under occasional attacks from Metroids.

Living among the planet's wildlife is also a large amount of active mechanical constructs and hostile robots left behind by the Chozo. The reason for their overall violent behavior is unknown. 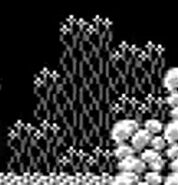 The same flowers, with the Super Game Boy Palette

A dangerous plant found only in the first tower corridor 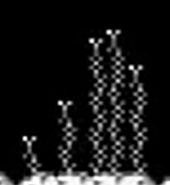 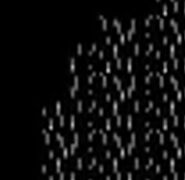 Moss in an unknown location

Bubble-like structures in Phase 8, which may have been the visual inspiration for the various growths in Area 8

Plants on SR388 in Fusion

Red plants seen in Sector 1, which may be native to SR388 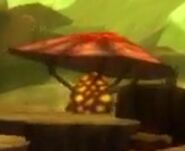 A mushroom-like plant found on the Surface 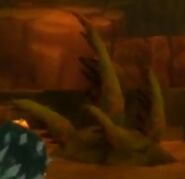 Ferns found on the Surface 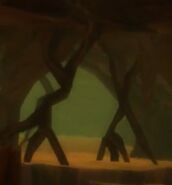 Roots found on the Surface

A prickly plant found on the Surface

A leafy green plant in Area 1

Yellow and red growths in Area 8

Note: This article lists locations by their names in Samus Returns. These areas use a different naming scheme in official walkthroughs of Return of Samus in Nintendo Power, which lists them as Phase 1 through Phase 9. Note that Phase 5 and Phase 6 were combined into Area 4, and Phase 8 was divided into Area 6 and Area 7.

The Surface area of SR388, distinct for its rocky terrain and modest plantlife. This is where Samus's Gunship lands, and the first Alpha Metroid is fought. The Samus Returns-exclusive final boss Proteus Ridley is also fought here at the end of the game.

Area 1 is a Chozo settlement that contains 4 Alpha Metroids.

One of the most desolate areas in SR388, Area 6 contains 1 Alpha Metroid replaced by a Zeta Metroid in Metroid: Samus Returns and 1 Omega Metroid, as well as the Diggernaut boss battle exclusive to Samus Returns.

Area 7 is the laboratory where the very first Metroids in existence were bio-engineered by the Chozo. It contains 3 Omega Metroids.

Area 8 is the main hive of the Metroids and final area of SR388, containing 8 (Return of Samus) or 10 (Samus Returns) Metroid larvae, the Queen Metroid and the baby, which Samus brings back to Ceres Space Colony.

Indo: "In the "Metroid" manga, it describes that "The Chozo developed the Metroids in order to exterminate the X living on SR-388", but I think it was previously established that "there is a high probability that the Metroid destroyed the civilization on SR-388." I think it was the X that really destroyed SR-388."

Yoshio Sakamoto: "I think SR-388's civilization was destroyed and the Chozo left for Zebes after the Metroids were released into the wild (became feral). The Galactic Federation, not knowing the reason why the Metroids were developed, requested Samus to clean them up ("Metroid II"). The result of Samus exterminating the Metroids was that the propagation of the X could permit the SR-388 ecosystem to be destroyed ("Metroid Fusion")."[4]

WELCOME TO PLANET SR388
"This desolate landscape looks empty at first glance, but there is a dark and dangerous world waiting for you just below the surface."
A lost world
"The underground labyrinth of SR388 is filled with peril at each turn. From vicious flora to killer creatures, each step you take may be your last. As you explore the dark tunnels, you may notice the remains of an ancient civilization. Could this long-lost culture be connected to the Metroids that now infest its ruins?"
DEADLY ALIEN CREATURES — [Blinking light]
"The deadly Metroids that inhabit SR388 are rapidly growing in number. Worse yet, they are evolving, becoming increasingly more powerful by the minute. This vicious species must be wiped out before they destroy the entire galaxy."
DANGER IN THE DARKNESS — [Blinking light]
"Countless explorers have been lost in the twisted underground tunnels of SR388. Luckily, you will be equipped with enhanced tools to help you safely navigate the treacherous caverns."
ANCIENT ARTIFACTS — [Blinking light]
"Besides the equipment you start with, there are many strange items you can find throughout SR388 to assist you."

SR388 as seen in Metroid Fusion.

The planet with three massive storms in its atmosphere, seen at the end of Samus Returns. They appear to resemble the three front nuclei of a Metroid.

Earliest known visual depiction of the planet in the Nintendo Comics System story, The Coming of a Hero.