Samus Aran (サムス・アラン, Samus Aran?) is the protagonist of the Metroid series. As a member of the "perfect-attendance crew", Samus has been featured as a playable character throughout the Super Smash Bros. series, appearing in all five installments to date and always as a starter character. She is notably the only female character with this distinction, as Pokemon were not gendered at the time.

Samus is one of the eight default characters, with her appearance based on Super Metroid. Her stock art icon on the character selection screen is directly based on this Super Metroid stock art. Her special moveset is based on power-ups from her home series, which includes the Charge Beam, the Grapple Beam (as her Grab), the Screw Attack, and Bombs. In the first game, she is subject to a rather infamous "glitch" where, if she is hit by Pikachu's thunder jolt or a ray gun, her Varia Suit vanishes and she has a silver polygon model exposed briefly, referencing her suitless appearances.

Starting with the first game, and in every subsequent game except for Melee (which featured a uniform character entrance for all the characters where they simply have their trophies come to life), her on-screen appearance is her emerging from a Super Metroid-style Save Station.

"Samus Aran is the toughest bounty hunter in the galaxy. Using a special suit powered by the technology of the bird people which allows her to execute daring acrobatic feats, Samus pursues the airborne life form, Metroid, throughout the universe."

Samus appeared in the manga as one of the antagonists. Specifically, she alongside Fox McCloud of Star Fox acted as the henchmen of the main antagonist, Phantom X (in reality, Link from the Zelda franchise), who faked an abduction of Yoshi in order to have Mario, Donkey Kong, Pikachu, and Kirby work together and stop bickering.

Samus returns in Melee with more buffed attacks and a new side special move, Missile. Out of all the fan tier lists for games in the Smash series, Samus's placement on the Melee list is the highest. She appears in the introduction cutscene of Melee, battling with Ridley in a re-enactment of the Metroid Theft Incident at the beginning of Super Metroid. In Melee, Samus is the only character whose screen images do not place her on her home stage, instead placing her on Corneria from Star Fox.

As with all playable characters in Melee, Samus has three trophies earned by completing Classic, Adventure and All-Star Mode once each. Samus is unique in that she actually has four trophies. The fourth, known as Samus Unmasked, is only obtainable via defunct, Japan-only promotional events or hacking.

Samus Unmasked
Add a photo to this gallery

In Brawl, Samus's design is now generalized and draws aspects from her appearances in multiple Metroid games. This is the only design of Samus used in Smash that has not appeared in a later game.

She now has a Final Smash attack called Zero Laser. The enormous pressure exhausted on her suit by firing the laser causes the suit to break off, leaving a new character transformation called Zero Suit Samus (based on her suitless appearance in Metroid: Zero Mission). Samus now has several alternate costumes resembling her Power Suits from the Metroid series, such as the Fusion and Dark Suit; these costumes correspond with Zero Suit Samus's alternate costumes.

Samus suffered nerfs in between Melee and Brawl, and is once again a low-ranking fighter on the Brawl tier list.

Samus also plays a role in Brawl's Adventure Mode, The Subspace Emissary. In it, she first appears in her Zero Suit, breaking into the base of the Subspace Army on the Island of the Ancients. Soon she comes across a Pikachu being drained of its electrical power. Samus uses her Plasma Whip to break the container the Pikachu is being held in, summoning a security force of R.O.B.s. The two join forces to retrieve Samus’s Power Suit, but are confronted by two Copied Power Suits.

After reacquiring her Power Suit, Samus and Pikachu come across Ridley. He grabs Samus and starts to drag her against the wall, until Pikachu returns Samus's favor and uses Thunder on Ridley, causing him to drop Samus. An infuriated Ridley attacks. Once they defeat him, the duo exits the base and come across a cave where R.O.B.s are exiting with newly manufactured Subspace Bombs.

Samus and Pikachu make their way through the Subspace Bomb Factory and find the Ancient Minister with the R.O.B. Squad. They prepare to fight, but then realize that he looks very sad. At that moment, Captain Falcon, Olimar, Diddy and Donkey Kong burst in. A hologram of Ganondorf appears and orders the R.O.B. Squad to activate the remaining bombs. The Ancient Minister tries to stop them, but is set on fire when Ganondorf orders them to retaliate. After the Ancient Minister is revealed to be a R.O.B. himself, Samus and the other characters all rush out to escape the Island before it is engulfed, but are confronted by Meta Ridley and duel him aboard the Falcon Flyer.

Samus groups up with the other fighters to lead an assault on the Subspace Gunship, during which she uses her own gunship as a distraction to buy enough time for Kirby to arrive on the Dragoon. She and the other fighters head into the Subspace Realm, but she is defeated by Tabuu and turned into a trophy when Tabuu arrives and uses his Off Waves to defeat all who are attacking him. King Dedede later comes to save her and she continues with the others to lead the final attack on Tabuu.

Although the story is not canon to Metroid, it is to be noted that some elements of the cutscene prior to the fight with Ridley in Subspace Emissary were later repeated in Metroid: Other M, and to a certain extent in Metroid: Samus Returns as well. Similarly, her being saved by an ally when nearly killed by her nemesis via said ally's natural abilities, and to a certain extent her nemesis's reaction to such, was also reused for Samus Returns (only in that case, it was the baby saving Samus via its life energy draining and transferring abilities on Proteus Ridley).

In addition to her fighter and Final Smash trophies, awarded by completing Classic and All-Star Mode, Samus has multiple trophies based on her Suits.

Samus (Dark Suit)
Add a photo to this gallery

Samus returns as a playable character in "Super Smash Bros. 4", with her appearance now being taken from Metroid: Other M, with minor cosmetic touches including extra vents. With character transformations removed, the Zero Laser no longer transforms her into Zero Suit Samus, who is a separate character with a new Final Smash. Samus's Power Suit is a downloadable outfit for Mii Gunners. Her fighting power has been regarded as having improved with updates to the game.

Samus has fewer extra trophies than in Brawl, but retains her Classic and All-Star trophies. 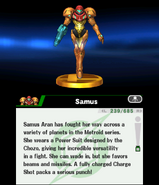 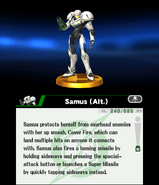 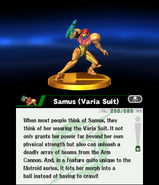 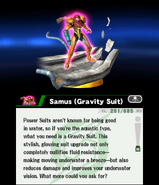 Samus (Gravity Suit)
Add a photo to this gallery

Samus (Dark Suit)
Add a photo to this gallery

Samus continues to use her Other M-style design from Super Smash Bros. 4 and has been turned into a powerhouse character with a stronger projectile game. During her new Final Smash, which is now a variant of the Zero Laser, Zero Suit Samus temporarily dons the Varia Suit, using the same model as the playable version. Samus now has an Echo Fighter, Dark Samus, making her and Peach (who has Daisy) the only female characters with an Echo Fighter.

Multiple versions of Samus appear as Spirits, replacing the trophies from previous games.

Samus is also naturally prominent in Ridley's reveal trailer for Super Smash Bros. Ultimate, as she appears moving carefully along a walkway in a dark ominous space station with Mario and Mega Man following her lead. Ridley suddenly strikes with incredible speed, dispatching both Mario and Mega Man while Samus is unaware. When she turns around with her Arm Cannon drawn all she sees is Mario's iconic cap left lying on the floor, before Ridley bursts from underneath the walkway and taunts Samus with Mario's cap. Towards the end of the trailer, Ridley uses his Plasma Scream to destroy Samus along with her Gunship. However, to the Space Pirate's surprise, Samus leaps from the wreckage of her spaceship (now in her Zero Suit) and attacks him with a kick.

Samus
Add a photo to this gallery

Samus facing Ridley and Kraid (as a hazard in Planet Zebes: Brinstar Depths).[3]

Image tweeted by Sakurai on August 6, 2020, the 34th anniversary of the original Metroid.[4]

Retrieved from "https://metroid.fandom.com/wiki/Samus_(Super_Smash_Bros.)?oldid=287649"
Community content is available under CC-BY-SA unless otherwise noted.