This article concerns the 2020 toy. For the actual weapon in the Metroid series, see Arm Cannon.

Based on the Arm Cannon's appearance in the Metroid Prime series, it is a functioning replica that includes an interior trigger, lights and sound effects, which are operated by battery power. The Arm Cannon was released on January 17, 2020 for $59.99 American, exclusively through GameStop in the United States. It was originally planned for release on November 15, 2019, but it was delayed to fluctuating dates in January 2020: first the 8th, then the 24th, then back to January 8th, and finally the 17th. It features an inside trigger that can be pulled; when this is done, the sound of the Power Beam firing from the Prime Series is heard. If the trigger is held, the Charge Beam charging sound is heard, and the lights of the cannon will become brighter.

The on-off switch is located inside the top of the cannon. When turned on, a sound from the Prime series (when onscreen tutorials or messages are closed) will play; when turned off, a different sound plays. The charge can be held for a few seconds, after which it will automatically release. It is powered with three AA batteries, which are inserted in the left side of the cannon underneath one of the side panels. In Metroid Prime and Metroid Prime 2: Echoes, Samus would open this panel and reveal four colored buttons representing her four Beams when idle.

The boxart features the orange Metroid logo introduced with Metroid: Samus Returns, while using a render of Samus Aran herself from Metroid Prime 2: Echoes. A glass, flat display base for the Cannon is included in the package, and both the base and Cannon come wrapped in bubble wrap.

Prior to its listing on GameStop on October 11, 2019, a user in the fan subreddit r/Metroid claimed that a GameStop cashier told them that an Arm Cannon replica would be released in November.[1] 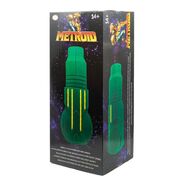 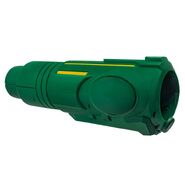 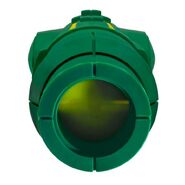 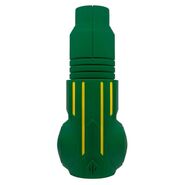 Safety warnings on the back of the sheet in English, French, Spanish, Italian and German. 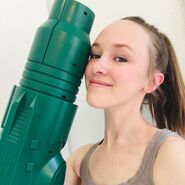 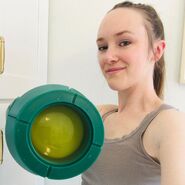