The Samus Aran Crystals were a set of extremely rare, 3D laser-engraved rectangular crystals created by Rocky Newton. Only fifty were ever produced. Each of the crystals was given to employees at Nintendo Software Technology as a Christmas gift. At least one of them has been placed up for auction.[1] The crystal depicts a holographic image of Samus Aran, which is incomplete as her right leg is not fully formed. Samus's legs are surrounded by thin rings. The sculpture also features the Screw Attack symbol, the names Metroid Prime: Hunters and Nintendo Software Technology Corporation, as well as the production number (i.e. 30/50). 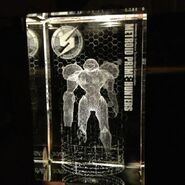 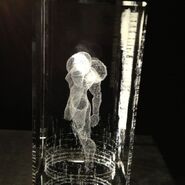 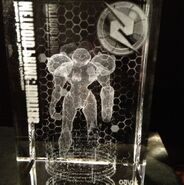 Retrieved from "https://metroid.fandom.com/wiki/Samus_Aran_Crystal?oldid=262579"
Community content is available under CC-BY-SA unless otherwise noted.