The Samus Data Screen, in essence, is the file select screen in the Metroid series. Save files often have an image of either Samus or her helmet (or Zero Suit Samus's head in Metroid: Zero Mission, if the game is at that point) that reacts (such as the helmet turning to face the screen). The amount of energy Samus had at the last save, game time elapsed, item percentage and current location have traditionally been featured on the Screen as well. No Metroid game has ever allowed for more than three save files.

Metroid featured a save system, and in turn a Data Screen in the Famicom Disk System version, but the localized version of the game utilized a password system, the only game in the series to do so. Metroid II: Return of Samus did not feature this, only the Title Screen with "Start 1, 2 or 3" files. In Super Metroid, after selecting a game file, the game's options were brought up as they cannot be edited once the game is in session. In addition, the Super Metroid Samus Data Screen also has heavy breathing sounds similar to those of Darth Vader in the background that briefly enter a fast pitch when the save data is selected.

Metroid Prime was the first game in the series to feature unlockable bonuses accessible from the menu, namely the Concept Galleries and Metroid Fusion Connection Bonuses. Metroid Prime 2: Echoes, which featured a "gyroscope" system for its menu interface in the game menus, followed suit with this, as well as Metroid Prime 3: Corruption, Metroid Prime Hunters, Metroid Prime Trilogy and Metroid: Other M, with Echoes and Hunters featuring multiplayer modes too. The Hunters screen only displays time elapsed and percentage of Octoliths collected, and has a link to Movies mode. The Trilogy has three separate files, with another option screen to play all three games in each file. File slots in Corruption and Trilogy will also show the number of Energy Tanks the player had collected in that file, and Prime's file selection screen appears to take place against a background of a growing Phazon tumor, seen from multiple angles. In Other M, after MB's death her hairclip is present on the save file, and after it is recovered in-game Adam's helmet appears as well. The hairclip's presence is curious, it may indicate that someone took it after it was smashed by The Colonel, likely Dr. Madeline Bergman, who shared an emotional connection with MB, her "daughter".

In Spanish, the Samus Data Screen is referred to as Archivos de Samus.

"The Samus Data Screen displays the progress of the three data files. When you select a data file, play the game and save the data within the game, the data file will be updated. You can also use the Samus Data Screen to copy and clear files. Move the cursor by pressing Up and Down on the Control Pad to the desired data file or function, then press the A button to carry out your choice."

Playing the Game
"After inserting the Super Metroid cart and turning on your SNES, you'll be greeted by a title screen. From here, pressing either START or [A] will allow you to set up the game to your liking."

Press [A] on the title screen to view the file selection screen.

File Selection Screen
"Use [Control Pad]/[Circle Pad] to select a file, then press [A] to confirm your selection and open the main menu." 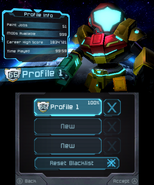 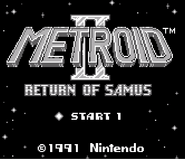 The Japanese Metroid Fusion menu, which features, in addition to an option for stereoscopic or headphone sounds, Adult Mode and Child Mode
Add a photo to this gallery
Retrieved from "https://metroid.fandom.com/wiki/Samus_Data_Screen?oldid=280237"
Community content is available under CC-BY-SA unless otherwise noted.