The Sanctum is the final room in the Sky Temple. It appears in Metroid Prime 2: Echoes and is the final new room left for Samus to explore.

The Sanctum has a small platform overlooking a large rotunda surrounded by a ring of Phazon. From here, Samus can see the last bit of Aether's planetary energy, which is also the only thing keeping its dark counterpart in existence. A large puddle of darkness swarms underneath the planetary energy for a few moments before dissipating. Once Samus jumps down and approaches the ball of light, however, the Emperor Ing emerges from the floor and absorbs the ball of planetary energy, forcing Samus to fight the Ing's mighty leader. After taking enough damage, the Emperor retreats into an impenetrable shell, and poison gas slowly rises up from the Sanctum's floor. Once all of the tentacles sticking out of the shell have been destroyed, the Emperor Ing comes out of the shell, transformed. Once the Mutated Emperor Ing has been destroyed, Samus absorbs the planetary energy. With the last of Dark Aether's energy removed, pillars rise out of the ground, and an 8-minute Countdown begins. By jumping on each of the pillars until she reaches the top, Samus can use the Screw Attack to reach the exit.

The Light Aether version of this room is the Temple Sanctuary, but because the Sky Temple is an upside-down version of the Great Temple, it occupies the same space as the Main Energy Controller.

This is the only non-Energy Controller room to play the Sun Generator Dark theme, in this case before and after the Emperor Ing battle.

Emperor Ing Body
"Morphology: Emperor Ing Body
Ruler of the Ing Horde.
Target is drawing energy from the unstable Energy Controller. Eliminating target's connection to the energy may be an effective strategy."

Mutated Emperor Ing
"Morphology: Mutated Emperor Ing
Altered ruler of the Ing Horde.
Further Phazon mutation of the Emperor Ing has occured. The creature seems to only take damage when its heart is Light or Dark. Find a way to change the heart to one of these colors."

Nightbarbs (can be summoned by the Emperor Ing with a Dark heart)
"Morphology: Nightbarb
Flying airborne hunters native to Dark Aether.
Targets are small but travel in large numbers for safety. Avoid contact."

Energy Core
"Object analysis complete.
This is the core of the final Dark Energy Collector.
The last collection of planetary energy lies within the core. When you place it within the Energy Transfer Module for return to Aether, this world will become heavily unstable."

"Planetary condition critical! Escape at once!" 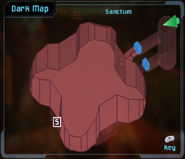 Room seen on the Map.

Samus enters the Sanctum with her Varia Suit (obtained via hacking or glitching).
Русский
Community content is available under CC-BY-SA unless otherwise noted.
Advertisement