Sandbats are small flying creatures native to the planet Aether. They appeared as minor enemies in Metroid Prime 2: Echoes.

Sandbats are brown in colour, and often fly in groups to increase their potency and reduce casualties. In groups, they search for food, then devour it. Unable to locate any, they will cannibalize one another.

In some areas, such as the Mining Plaza, these creatures will circle bridges and other platforms in large numbers, making it difficult for Samus to advance without damage unless she kills them all. However, they are not much of a problem, so they can be ignored.

Sandbats are small flyers. They travel in packs for safety, though they are predators in nature. Failing to find food as a group, Sandbats will often enter a feeding frenzy and attack one another in search of sustenance. 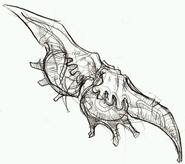 Concept Gallery
Add a photo to this gallery
Retrieved from "https://metroid.fandom.com/wiki/Sandbat?oldid=218588"
Community content is available under CC-BY-SA unless otherwise noted.