Sandiggers are a species of large worm-like creatures living on the planet Aether, in Agon Wastes. The creature has two heads, with each one located at the tip of either end of its body. With a brain in each of them, both heads are capable of attacking, disabling and digesting prey; however, only one end is active at a time. It fires an acidic fluid at victims to disable them, then tries to digest them. Only its eye on the active head can be damaged. They tend to crawl out of the sand only to attack creatures that pass near its lair.

A larger variant, the Alpha Sandigger, is encountered by Samus later on, but is quickly possessed by the Ing that stole her Bomb item and mutated into the Bomb Guardian. It is also believed that the Sandiggers are somehow related to the giant Amorbis.

Sandiggers are found in the Mining Plaza and Mining Station B.

In Episode of Aether, a swarm of Sandiggers attack Miguel Luis Garcia, Lily Thran, and Jeff McCloud while the trio are passing through the center of a barren, rocky area. They are seemingly invincible to Miguel's weaponry, and their acid attack burns his arm and Jeff's leg, rendering the latter unable to run. Klaus Schneider saves the group and helps them to finish the attackers off with grenades.

Scans indicate that the Sandigger has a dual-brain nervous system. Both of its heads are capable of attacking, disabling, and digesting prey. It fires globs of acidic digestive fluid at prey to cripple them and begin the digestive process. Its hide is very durable and resistant to weapon fire: only its exposed eyes can be damaged. 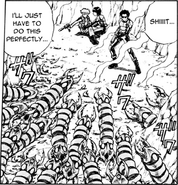 A Sandigger in an early version of Metroid Prime 2: Echoes. 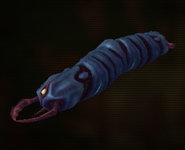 Add a photo to this gallery
Retrieved from "https://metroid.fandom.com/wiki/Sandigger?oldid=259701"
Community content is available under CC-BY-SA unless otherwise noted.