none; explodes violently when shot

any weapon of any type

Sap Sacs are naturally bioluminescent plantforms encountered in Metroid Prime. They are native to the planet Tallon IV.

As their name suggests, Sap Sacs are vines bearing large sacs filled with a bright orange sap that is very sweet, making them a staple of the diet of many creatures on Tallon IV. To avoid extinction, the plantform has evolved a curious defense; whenever a sac is compromised, it explodes violently. Destroying one will yield Energy for Samus to pick up. It has an aquatic relative known as the Aqua Sac. Sap Sacs are able to quickly regenerate the sap chamber after rupture.

Sap Sacs are useful tools in certain situations for causing instant death to surrounding creatures. In most cases, a Bloodflower will grow near one, providing an easy way to dispatch the plant. Samus can shoot the Sap Sacs when any particular creature happens to wander a little too close. These cause Bloodflowers to burst into flames. Sap sacs can also cause chain reactions when shot. For example: if multiple sap sacs are near each other, the explosion of one can cause the explosion of all the sap sacs around it. 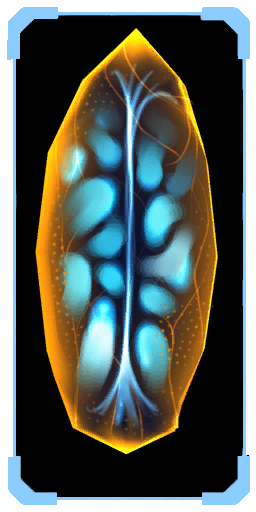 Because of its irresistible odor and sweet nectar, the Sap Sac was nearly eaten out of existence. The evolution of an explosive chemical sac saved it; now only brave or ingenious creatures dare to devour it.

"Sac" is the French word for "bag", referring to the Sap Sac's bag-like qualities.