Wikitroid
Register
Don't have an account?
Sign In
Advertisement
in: Featured articles, Gunship Features, Save Stations,
and 13 more
English

This article refers to the device. For other uses, see Save Station (Disambiguation).

Save Stations (called Save Points in Metroid II: Return of Samus or occasionally Save Rooms) are a recurring feature and type of room in the Metroid series. Save Stations allow Samus to save her progress (sometimes referred to in-game as a "data backup") during missions.

Save Stations first debuted in Metroid II: Return of Samus and have appeared in every Metroid game since then, making the original Metroid and Metroid Prime Hunters the only games without Save Stations (instead, Metroid uses Passwords; in Hunters, Samus can save at her Hunter Gunship). In the games in which it is present, Samus's Gunship also functions as a Save Station that also refills health and ammunition, with the exception of Metroid II, where the Star Ship only serves to restore health and ammo.

In Metroid: Other M, Save Stations are replaced by Navigation Booths, which act as Save Stations and also allow Samus to download map data. It is implied that the other soldiers in the 07th Platoon use them to communicate when separated.

Save Stations vary in design throughout the series. The original save station from Metroid II: Return of Samus is nothing more than an ornate pole with a glowing top. Super Metroid features a capsule-like design, but in Metroid Fusion and Metroid: Zero Mission save points are weight-sensitive platforms. Metroid Prime's (designed by Don Hogan [1]) and Metroid Prime 2: Echoes's have several "working fingers" that project beams of light which seem to restore Samus' suit energy. In Prime these are constantly extended, but in Echoes they descend for saving and ascend when the process has completed. In Metroid Prime 3: Corruption they appear revamped, with a more simplistic and sleek design which functions almost exactly the same as in Fusion. Metroid: Other M's Navigation Booths are also simplistic touch-sensitive platforms, which restore energy in a similar way to the ones seen in Corruption. The varying designs can probably be attributed to the different planets they appear on, and the cultures of the races that made them.

In Metroid Dread, Save Rooms feature Chozo statuary, a further sign of their presence on ZDR. They are shown to be holding something on their shoulders. Their pose references the ancient Greek Titan Atlas, who was condemned to hold the heavens on his shoulders for all of eternity.

Save Stations are referred to as data save units in this guide. The name is also present in every version of the manual.

Terminals (page 8)
"These are fairly liberally spread across the levels. It's usually wise to use them as you find them because this is where you will restart should you get killed. To save a game, simply stand inside the unit and a message will pop up asking whether or not you wish to save. Select yes and saving will occur. Location: All areas."

Saving Data: "Data save units are found in each area. If you bring Samus into one of these, you will be prompted to save the game data. Select YES to do so. You'll then be able to start the game over from where it was last saved."

Data Clear Mode
"Select the data you wish to clear, press the A button and select yes to confirm." 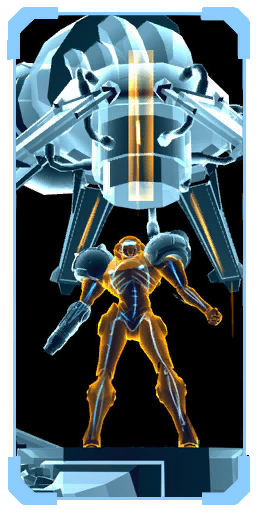 Step into these holograms to save your game and fully restore your energy. 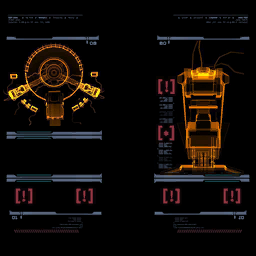 Save Station
Enter here to save your game and fully replenish your energy.

Enter these stations to save your game and fully restore your energy. 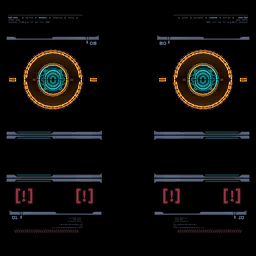 Your gunship is equipped with a Save Station.
Enter your gunship to save your game.

Like normal Save Stations, saving at your gunship will fully replenish your energy.

Note: This is a general description for all stations in the game, including Energy, Ammo, Save and Teleport Stations.

Stations
"These mysterious machines let you recharge your energy or ammo, save your progress, or travel quickly between areas—but you must locate them first!"

"Stand on the plate to save."

"Manually save your progress. (Whew.)"

Artwork of Samus in a Save Station, Super Metroid

Samus begins from a Save Point in Metroid II: Return of Samus. 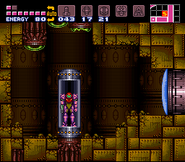 The very first Save Station in Crateria in Super Metroid.

Samus at a Save Station in Metroid Fusion.

Zero Suit Samus uses the first Save Station on board the Space Pirate Mother Ship in Metroid: Zero Mission.

Samus uses a Save Station in Metroid Prime.

Samus replenishes her Energy in a Save Station, Metroid Prime.

Samus uses a Save Station in Metroid Prime 2: Echoes.

Samus begins from a Save Station in Metroid Prime 3: Corruption. 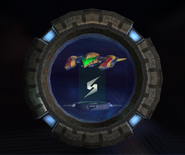 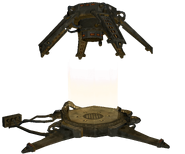