Scalding-hot lava is found in Crateria, Norfair, Ridley's Hideout, and Tourian. Since it is most prominently seen in the depths of Norfair, it is generally assumed to be superheated from being closer to the planet's core. Interestingly, most of the Craterian rooms containing scalding-hot lava feature at least some metallic architecture (including one room of the old Tourian ruins), which may suggest that this substance might not be natural in origin.

Compared to normal lava, scalding-hot lava appears lighter in color (a more yellowish hue compared to standard lava's reddish-orange), more translucent, and with a flat surface without bubbles. Most importantly, this variant is far more potent and dangerous, still able to harm Samus Aran even while she wears the Gravity Suit.

Scalding-hot lava makes a notable appearance in Croc's pit, where it runs throughout the cave. While other Norfair inhabitants (such as Dragons) can thrive in scalding-hot lava, Crocomire's flesh melts away when it falls into the liquid, leaving nothing but its bones. Since Crocomire is impervious to all of Samus's weaponry, the extreme heat of scalding-hot lava is the only thing that can kill it.

In the rebuilt Tourian headquarters, two versions of scalding-hot lava are seen. The usual variant is present in the Zebesian Command Center. The rest of the area features a thicker, reddish version of lava, which is functionally identical to scalding-hot lava despite being visually unique. The latter appears to be represented in-game with the normal scalding-hot lava overlaid over opaque red lava in the level's background; therefore, the translucent scalding-hot lava layer can be seen over the metallic architecture in the same room.

There are several rooms in Super Metroid, including the Lava Lake, where an earthquake occurs and causes lava to flood the room. In certain rooms, such as the Zebesian Command Center, a second earthquake may cause the lava to drain. During the countdown as Samus escapes the Time Bomb, many rooms in Tourian gradually become flooded with scalding-hot lava, as well as the room in Crateria where the Etecoons and Dachora are trapped.

Similar to the dangerous liquid in Metroid II: Return of Samus, there has been some debate, due to conflicting official sources, regarding whether this substance should be considered lava or acid.

In all English media for Super Metroid, including the NTSC and PAL guidebooks as well as Playing with Super Power: Nintendo Super NES Classics, this substance is referred to as lava. Additionally, Ridley's Lair and Tourian have both been traditionally depicted with lava in other games (specifically, Metroid and Metroid: Zero Mission).

However, the Japanese guidebook Nintendo Official Guide Book for Super Metroid contradicts this by referring to the substance in Croc's pit as hydrochloric acid (塩酸?), which would make this liquid a more potent variant of acid rather than lava. In real life, hydrochloric acid is known for being a strong acid. This implies that Crocomire's weakness is acidity, rather than heat as commonly assumed. However, it is unknown if this only refers to the liquid seen in Croc's pit, or all appearances of the liquid seen throughout Zebes.

The inconsistency is exacerbated by Super Metroid: The Official Nintendo Game Guide. This German guidebook first refers to the liquid in Croc's pit as an Acid Bath (Säurebad)[3], but then later asserts that Crocomire melted in the Lava Masses (Lavamassen)[4].

Beta Acid is seen in the Tourian-like areas of Sector 1 (SRX). It also appears in the Zebesian Command Center in Zero Mission, when Samus returns to the area with her newly-acquired Gravity Suit. Although it is teal in color, Beta Acid functions identically to scalding-hot lava, and the fact that both liquids are found in the Zebesian Command Center might imply a connection.

The lava in Metroid Prime and Metroid: Other M can damage the Gravity Suit, much like scalding-hot lava in Super Metroid. In contrast, Zero Mission added acid immunity to the Varia Suit's properties. Both would support the potent liquid being lava rather than acid.

Lava Tides[1] are a hazard where the scalding-hot lava level periodically rises and falls. The lava alternates between rising and subsiding at a steady rate. The difference between the highest and lowest points of the Lava Tides varies between rooms. In some rooms, the difference is minimal; in certain other rooms, the lava may rise high enough to submerge lower platforms, reducing the amount of safe ground where Samus Aran can stand. Therefore, Samus may need to wait for the Lava Tides to subside before she can progress through a room.

Lava Tides are found in all areas with scalding-hot lava except the rebuilt Tourian; however, a section of the old Tourian ruins in Crateria does feature Lava Tides. Notable rooms containing Lava Tides include "The Gauntlet", Croc's pit, the lava room, and Ridley's chamber.

As previously mentioned, certain rooms have earthquakes that cause scalding-hot lava to flood or drain. However, once the lava has risen after an earthquake, it stays at a consistent level. This is also seen in the Crater Interior in Metroid: Other M, in the buildup and aftermath of the Goyagma boss fight.

In Metroid: Zero Mission, the Acid Worm can cause the acid in its chamber to rise and fall as one of its attacks. Damage can be completely negated by obtaining the Varia Suit early.

The Norfair stage, introduced in Super Smash Bros. Brawl, features Lava Tides as one of its stage hazards. At random intervals, the level of lava will rise and fall. When the lava rises, it covers the lower blast zone, potentially saving fighters from falling off the stage. However, it also can cover up to three of the lower platforms, significantly reducing the amount of safe ground for fighters to stand on.

Rising/falling deadly liquid is a recurring Metroid stage hazard in the Super Smash Bros. series, even before the inclusion of Lava Tides in Norfair. The acid in Planet Zebes and Planet Zebes: Brinstar functions the same way as the lava in Norfair. The official Super Smash Bros. website even referred to the Planet Zebes acid as lava,[5] which would have made the reference to Super Metroid's Lava Tides even clearer. Alternatively, considering that scalding-hot lava is referred to as acid in Japanese and German, the rising/falling acid on these stages may be a more accurate representation of the original hazard.

AVOID THE LAVA TIDES (pg. 35)
"It would be easy enough to just Bomb through them, but there is scalding-hot lava to contend with. Use repeated Space Jumps to avoid the lava until it subsides."

"As you can imagine, the lava level will indeed rise and cover the platforms. It's dangerous to touch it."

Brinstar: Acid Lake
"The level of the acid lake rises and falls. When at its highest point, all platforms but the highest ones will be swallowed up."

Norfair: Magma
"The magma that rises on this stage will gradually cover all but the topmost platforms. Seriously, the floor is lava." 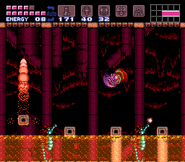 Dragons living in the scalding-hot lava in Ridley's Hideout 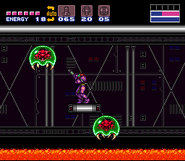 Scalding-hot lava filling up the Torizo's room after Samus enables the Dachora and Etecoons to escape.
Add a photo to this gallery

Retrieved from "https://metroid.fandom.com/wiki/Scalding-hot_lava?oldid=280219"
Community content is available under CC-BY-SA unless otherwise noted.