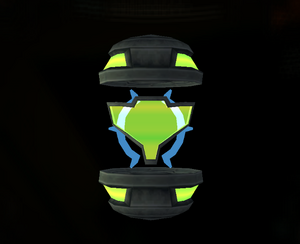 With the Scan Visor, Samus can scan certain objects to learn more about them or perform a function. When a scan has finished, the game action freezes to allow Samus to read its contents. If Samus scans a creature, enemy or boss, Samus will gain useful hints how to beat them, such as weak spots and behavioral patterns. When she activates the Scan Visor, Samus will lower her Arm Cannon and is able to view scan targets through a screen known as the Sight Window. Scanning a boss will sometimes take more time than scanning a smaller creature or object. It consults several databases as well, including the GF Database, Space Pirate Datanet and Samus' own flora and fauna databank.

Some scans are recorded in the Logbook that allows them to be accessed later on; such data can be gathered from enemies, items, and lore or logs from such groups as the Space Pirates and the Chozo. Filling the Logbook with these scans in Prime and Echoes unlocks concept art, while in Corruption Red and Blue Credits are given to buy various unlockables. Scans that do not get recorded include those that perform functions, and those that are not critical to the mission, such as doors or crates.

In Prime and Hunters, the Scan Visor is almost visually identical to the Combat Visor. Scannable items are only marked with a square, called a Scan Point, representing what objects can be scanned in the area. In Prime, Scan Points are either orange or red, but in Hunters, there is one type of Scan Point for each category in the Logbook. The Scan Visor also allows Samus to see Alimbic Datashades in Hunters. After scanning in Prime, images of the subject appear to the left and right of the screen. Depending on the subject, different images will appear. Creature scans show blue pictures and close-ups with notable features displayed in orange. Subjects that cannot be downloaded to Samus' Logbook will only display text in Prime, but because most scans are downloaded to the Logbook in Hunters, the latter game features no such distinction.

The Sight Window in the New Play Control! and Metroid Prime Trilogy versions of Metroid Prime is circular rather than rectangular, but the Scan Points are retained. These versions have an additional central reticule.

In Metroid Prime, if an enemy or object is scanned exactly when Samus' energy is depleted, the visor will show the dialogue box that usually displays information, but it will be empty and no data is shown. Whatever music that was previously playing will continue to play, however.

A central reticule is added to the Sight Window. Like with Prime, the rectangular window is replaced with a circular one in the Wii versions of the game.

The Scan Visor can also be used to perform a scan jump similar to the Dash-Jump, which is used throughout the Prime trilogy to Sequence Break and obtain items out of the normal order. The images to the right and left of the visor that appeared in Prime are replaced by a category system showing the scanned object's location in the Logbook. Objects downloaded to the Logbook mostly show a model of the subject, and Samus can zoom in and out, pan, and rotate it.

Samus briefly uses the Scan Visor to activate a Portal generator when Dark Aether is about to collapse.

Corruption retains the Blue, Red, and Green coding system of scannable objects, but the Scan Visor has a revamped look. Instead of the traditional Sight Window, four crosshairs are used as a cursor for locating scannable objects, which expands over the target depending on the size of the subject. A reflection of Samus's face can be seen, which shows the spread of her Phazon corruption as the game progresses.

The images that are shown after scanning return from Metroid Prime, and applies to all objects. Also, the models that appear in the Logbook from Metroid Prime 2: Echoes are retained, and are viewed in a similar fashion. In Corruption, Red and Blue Credits can be gained from scanning, which are used to unlock secret concept art, music, and other features.

In Pinball, the Scan Visor itself does not appear, but there is a similarly named item, the Award Scanner, in its place. It can be considered a Scan Visor usable in Morph Ball form. A Board Feature on every table, it resembles a Spinner and can be "scanned" to get a powerup or enhancement.

A form of Scan Visor, named Examine, appears in the Search View mode in Metroid: Other M. The Visor is used to lock onto environmental objects, such as mission-critical characters, items for the same purpose as the characters and obstacles to find their weakness. Various symbols scroll through a bar (depending on the item/obstacle it could be an item for the necessary item to remove the obstacle) and the appropriate one is highlighted. Bosses can also be "scanned" (by locking on to them in Search View) to reveal their health bars in Search View, but the text and Logbook sections are no longer present. Enemies and parts of the environment also cannot be scanned.

Sometimes, when the camera shifts into Samus' point of view during a cutscene and she is looking at something or someone, a colored outline will appear around the subject, as it does during gameplay. This either indicates Samus' Scan Visor feature is always turned on in this game, or that she is actively using it.

A full list of possible targets with Examine are below:

While Federation Force has no Scan Visor or similar mechanic for scanning enemies or environmental objects, some missions have up to three data terminals that provide small snippets of information, lore or logs. An item called the Scan Bolt is a projectile that can be fired at enemies to reveal weak points.

SCAN VISOR - Learn by Doing
"The Scan Visor is invaluable for a wayward bounty hunter. You can activate the Scan Visor by touching the Control Pad. Once it is in place, you can explore Tallon IV in greater detail. When you meet an enemy for the first time, don’t just charge into combat. Scan it! When you see an unusual rock formation or a strange piece of machinery, click the Scan Visor into place and see if the unknown object will divulge its secrets. You can use the visor to activate computers, open doors and read ancient Chozo lore. It makes the game a truly interactive experience.
You can use the Scan Visor to activate doors and other electronics and deactivate sentry guns. When you find a square area called a Scan Point, hold down the L Button to lock on. The device will function once the scan is complete.
You can scan enemies in the same fashion. Hold the L Button to lock on to an enemy, then watch in amazement as a flood of information flows over the screen – including biological readouts, attack strategies and possible weaknesses.

The Scan Visor is used to collect data and activate certain devices. Samus is unable to fire any weapons while using the Scan Visor, but it can provide invaluable data about enemies' vulnerabilities. Scanned data vital to the success of the mission is downloaded and stored in Samus's Log Book.

"While Samus uses the Scan Visor, a magnifying reticule will appear in the center of her visor. This reticule picks out anything that can be scanned—from creatures to computer terminals—and shows it as an orange or red symbol. If you press and hold the L Button while locked onto one of these symbols, the Scan Visor will download information. Once it's done downloading, the visor will display a message."

The Scan Visor is used to collect data. Some devices will activate when scanned.
Press

then point up and release

to activate the Scan Visor. Move the Visor over targets with this symbol

, then press and hold

to select another available Visor or press

to turn the Visor off.

will be red in color.
Scanning enemies with this Visor can reveal their vulnerabilities.
You will be unable to fire any weapons while the Scan Visor is active. Scanned data vital to the success of the mission is downloaded and stored in the Log Book section of the Pause Screen.
Press

The Scan Visor is used to collect data. Some devices will activate when scanned.
Press

and point up to select the Scan Visor. Move the Visor over illuminated targets, then press and hold

to scan them.
Use

to select another available Visor or press

to turn the Visor off.

Mission-critical scan targets will be red in color.
Scanning enemies with this Visor can reveal their vulnerabilities.
You will be unable to fire any weapons while the Scan Visor is active. Scanned data vital to the success of the mission is downloaded and stored in the Logbook section of the Pause Screen.

The Scan Visor is used to collect data. Some devices will activate when scanned.
Hold

to bring up Visor Select. Move the cursor into the top zone and release

Mission-critical scan targets will be red in color.
Scanning enemies with this Visor can reveal their vulnerabilities.
You will be unable to fire any weapons while the Scan Visor is active. Scanned data vital to the success of the mission is downloaded and stored in the Logbook section of the Pause Screen.

An essential tool, the SCAN VISOR is able to identify most forms of alien language and xenobiology. To activate the SCAN VISOR, tap and hold the small button centered at the bottom of the touch screen. Once it is activated, press and hold the FIRE button to scan an object. Scroll data by tapping the left and right arrows. Tap the SCAN VISOR button again to deactivate.

"Scannable items in the environment appear in red, blue, or green. Green light means the object has been scanned before, red light means the item is mission-critical, and blue lights mean you can gather some information about the item. If you press and hold the L Button while locked onto one of these symbols, the Scan Visor will download information. Once it's downloaded enough, the visor will display a message. You can press the A Button to display more of the message if it continues off-screen."

"EXAMINE
Press and hold [B] on the area you want to examine."

Scanning a Beetle in Prime.

The Scan Visor being activated on the touchscreen in Metroid Prime Hunters.

A green scan in Corruption.

Using the scanning cursor to target a viable scan in Corruption. 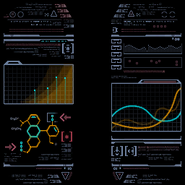 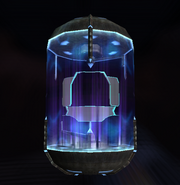