The Scarp is a massive deceased bioengineered organism akin to a fish, encountered by Samus Aran while on the Space Pirate Homeworld in Metroid Prime 3: Corruption. It is found hollowed out in the Scrapvault of Pirate Research. Samus can walk through a hollowed-out area that runs through the creature's corpse.

Being that this appeared to be an experiment, it is unknown whether or not more were made or even what purpose it was created for. Several Phazon growths protrude from its sides, suggesting that the bioform was killed by Phazon poisoning. Its back seems to be flat; this could indicate that the Pirates were in the process of dissecting the creature when Samus arrived, which would explain the hollowed out section as well.

Scrapvault
"Unknown bioform is deceased. Subject appears to be part of a bioengineering experiment."

A view of the hollowed out middle and Phazon patches, from Kip Carbone.net.

"close up of phazon blisters"

A platform running through the creature's interior. 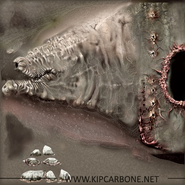