Scatter Bombu are creatures in Metroid Prime. Comprised of living energy, their bodies consist of three pink orbs attached to a central nucleus, and emit three rotating beams of electricity to gather food. If Samus charges any beam weapons, the Scatter Bombu will sense the charged energy and attempt to feed off of it. Getting close to one will cause visor interference. Because of their energy-based nature, they can only be harmed by the Wave Beam.

Scatter Bombus are found in the small cylindrical corridors scattered throughout Tallon IV, and are commonly used by Space Pirates for patrolling hallways. They are related to the free-roaming Pulse Bombus, which are similarly employed by the Pirates.

An extremely similar enemy called the Diligence Class Drone is found in Metroid Prime 2: Echoes, apparently based on the naturally occurring Scatter Bombu. 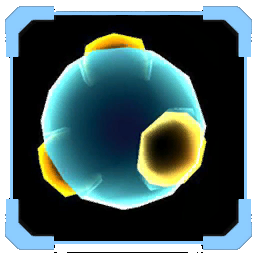 Like all Bombus, these creatures can only be harmed by electrical energy. Proximity to these life-forms may result in electrical Visor interference. It is possible to avoid engaging Scatter Bombus by rolling into the Morph Ball and slipping between the rotating energy seams.

Ice Ruins Access
Add a photo to this gallery
Retrieved from "https://metroid.fandom.com/wiki/Scatter_Bombu?oldid=257597"
Community content is available under CC-BY-SA unless otherwise noted.