Wikitroid
Register
Don't have an account?
Sign In
Advertisement
in: Pages with sourced titles, Species, Zebes,
and 11 more
English

Scisers are three-eyed crustaceans found inhabiting the Crateria and Maridia regions of Zebes. They typically crawl continuously in a single direction at varying speeds (some as slowly as Zoomers, while others move quite rapidly) on small legs, with their large, curved claws perpetually raised.

Scisers are fairly weak, being one of the few enemies easily dispatched with the Grappling Beam. There are also withered, rotten corpses of Scisers in Draygon's chamber, which were presumably devoured by the Evirs and Draygon itself.

After the planet's destruction, Scisers were grown on the Biologic Space Laboratories research station's Sector 1 and Sector 4. These specimens on the BSL station were blue and gold in color; it is unknown whether this coloration is natural. As Samus investigates Sector 4 following the X Parasites' breakout, these specimens will often become infected by passing X Parasites.

The physiology of X-infected Scisers differs radically from that of their hosts: Gone is the third eye, and their shells grow thicker and spikier, with enlarged claws capable of shooting arcing projectiles. Coloration also changes radically, with the carapaces turning grey, the legs blue and the enlarged claws purple. Said claws are also now capable of releasing arcing projectiles, which the X-infected Scisers do intermittently while moving in repetitive left-to-right patterns. They can be found crawling around on the floor, walls, or ceiling of Sector 4.

In rare cases, a golden Sciser will form from X Parasites. These are much stronger than their average counterparts, and their claws can block some of Samus' weaponry. 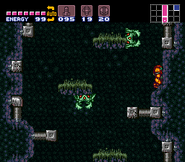 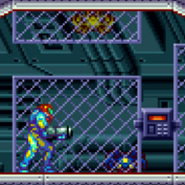