Wikitroid
Register
Don't have an account?
Sign In
Advertisement
in: Articles with non-canonical information, Chozo technology, Items,
and 16 more
English

The Screw Attack (スクリューアタック Sukuryū Atakku) is one of Samus Aran's most iconic and powerful Power Suit upgrades. It is an advanced movement system that allows Samus to emit energy waves from points on her armor while she somersaults into the air, turning her into a rotating energy blade of destruction. The Screw Attack can destroy most creatures and Screw Attack Blocks instantly on contact. It first appeared in Metroid, and has appeared in most games since, except for Metroid Prime and Metroid Prime Hunters.

The Screw Attack is traditionally thought to have been invented by the Chozo, due to its appearance in the hands of Chozo Statues. However, this origin is possibly disputed in the Prime series; while most scans made by Samus' Power Suit for the Hint system in Echoes specify whether an upgrade is Chozo or Luminoth in origin, the Screw Attack is referred to only as "unknown technology". Still, it is entirely possible that the Hint system may have simply not been able to identify its origin, especially since it was protected by a state-of-the-art Luminoth Vault.

At some point in the past, the Chozo exchanged the Screw Attack technology with the Reptilicus. This is commemorated in the ice climate of the planet Bryyo in monument form by two statues: one represents the Chozo De'la, having its hand outstretched above the hand of another statue representing the Bryyonian emperor N'ge, the latter holding the Screw Attack in its palm. The scan of De'la says, "Statue represents De'la and the first Chozo gift of knowledge bestowed upon the Reptilicus." The Screw Attack item in N'ge's hand is collectible by Samus.

In Metroid: Zero Mission, Metroid: Samus Returns, Super Metroid, Metroid Fusion and Metroid Dread, the Charge Beam features a semi-Screw Attack function called the Spin Jump Attack. However, the official Screw Attack will make it obsolete. Neo-Ridley had the Screw Attack item in his possession in Fusion, and his Core-X restores the item to Samus.

In Metroid: Other M and all 2-D Metroid games except for Metroid II and Super, the energy surrounding Samus during a Screw Attack constantly shifted colors; Super and the Prime series kept it to a single color: green and yellow, respectively.

In Other M the Screw Attack is re-equipped by Samus at the same time as the Space Jump, although the two are separate items by default and nothing like in Echoes and Corruption. It is far more powerful than in previous 3-D games, capable of reducing enemies far larger than Samus to a puff of smoke. Samus activates them without Adam Malkovich's approval, having lost contact with him while tracking the Deleter. He disables a bridge to stop her from following him, and she takes the liberty of enabling both items, jokingly asking "Any objections, Adam?"

When the Screw Attack is used in conjunction with the Space Jump, it becomes one of the most devastating weapons in every game it is featured in.

The Screw Attack seen in Metroid Prime 2: Echoes and Metroid Prime 3: Corruption is different from those found in every other game. It is actually a combination of the Screw Attack, Space Jump and Wall Jump from the 2D games. It enables Samus to "jump" in midair, though only in one direction and allowing up to five consecutive jumps; pushing the control stick either left or right will make her curve slightly towards the desired direction. It also enables her to jump off special surfaces, which activates the Wall Jump ability seen in post-Metroid II games.

While Samus is performing this form of the Screw Attack she is granted immunity to damage or "invincibility". It is possible that the Prime Screw Attack upgrades are of a different technology from their 2D counterparts, allowing them to perform altered functions. This would explain why the Hint system does not recognize the technology in Echoes, even though Samus had the upgrade during her Zero Mission before. Though the variant in the Prime games is quite powerful, it is only capable of killing off weak creatures in a single jump and requires additional hits from the upgrade to dispatch more powerful beings, unlike the Screw Attack from other entries. This makes it less practical as a weapon.

Interestingly, the Screw Attack gains a blue color in Corruption when used during Hypermode, including when Samus was in permanent Hypermode on planet Phaaze.

The glowing part resembles a buzzsaw.

According to Kynan Pearson, multiple developers (including Andy O'Neil[1]) worked on designing the Screw Attack in the Prime series. They first decided to limit its usage to prevent Samus from being able to gain altitude. After this, they spent time polishing the Wall Jumps and ensuring the camera would understand how to time using the item.[2]

Bryan Walker said that the Screw Attack was added to Echoes due to significant fan demand, and was more challenging to implement than the Spider Ball from an engineering standpoint. Michael Kelbaugh added that the decision to add the Screw Attack was unpopular with the game's engineers, but the studio was satisfied with the final result.[3]

The Screw Attack was discussed for inclusion in Metroid Prime, but "quickly shot down" according to Clark Wen. He enjoyed designing its sound, which was a synthesized and modernized version of its sound effect in Super Metroid.[4]

Samus has appeared in every Super Smash Bros. series game to date, and the Screw Attack has consistently been her Up Special recovery move in each game. When used, she launches up and deals damage to opponents on contact. After using the move, Samus descends while in a "helpless" state, in which she flashes rapidly and cannot move until she lands or is KO'd and respawns. In Super Smash Bros. for Nintendo 3DS and Wii U, each Special Move has three variants, with the Screw Attack's custom variants being the Screw Rush and Apex Screw Attack. As an Echo Fighter, Dark Samus also uses the Screw Attack as her Up Special.

The Screw Attack has also been an item usable by all characters, which gives them the ability to Screw Attack every time they jump, damaging opponents on contact. In Super Smash Bros. Melee, the Screw Attack is held, and it can be thrown at an opponent to deal damage. Starting in Super Smash Bros. Brawl, it is worn like a badge and falls off when it expires. Melee uses the more subdued color scheme of the item's Super Metroid sprite, while Brawl updates its design to match the brighter colors of its Zero Mission sprite.

The Screw Attack symbol is also used as the Metroid series emblem in the games.

One of Zero Suit Samus's victory poses has her kick with her leg and then pose with it bent; this stance slightly resembles the lightning bolt of the Screw Attack. 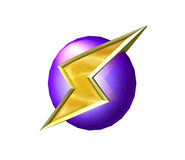 The Screw Attack as it appears in Super Smash Bros. Brawl. 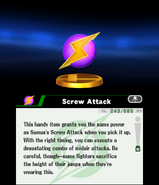 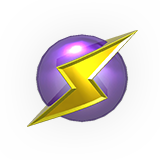 A video game website ScrewAttack got its name and logo from this item. The website also ranked Samus's Screw Attack as number 2 best power-up in its "Top 5 Best and Worst Power-Ups" list.[5]

Since Super Metroid, the Screw Attack symbol of a lightning bolt on a circle has become the Metroid series' official logo, being used for Fusion and Prime. It has also been the symbol for the suit upgrades in the Prime games. The "S" shape would seem to represent "Samus", "Suit", or "Screw". Alternatively, the shape could be a lightning bolt, in relation to the Screw Attack's electric nature. The symbol is depicted on the Metroid Hat and Medallion, two promotional items for Super Metroid. Furthermore, it is used on the Results Screen of the Metroid Prime Hunters Multiplayer Mode despite the upgrade's absence from Hunters: gold, silver, and bronze Screw Attack symbols indicate that the player ended up in first, second, and third place respectively. The player in fourth and last place is shown a red skull representing death.

The symbol in Super Metroid 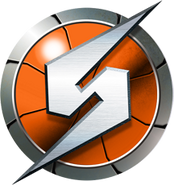 The symbol in Metroid Dread