Fires seeds at threats by exploding

Seedbursters are creatures that reside within the Torvus Bog of Planet Aether. They are small, mobile plants that travel in swarms in search of new habitat in which to plant their seeds and propagate. A Seedburster will forcefully eject some of its seeds at foes when threatened, with the intent of protecting the members of its swarm (and the seeds they carry) from the assailant. Samus can easily destroy a swarm of Seedbursters with the Power Beam.

Seedbursters exist in the Underground Tunnel and Training Access.

Seedbursters are moving plants, capable of traveling great destances in search of fertile soil to deposit thier seeds in. When provoked by predators, the Seedburster will explode, turning the precious seed inside into a deadly projectile. These seeds often do not live to fruition, but help protect the rest of the Seedburster pack form attacks. 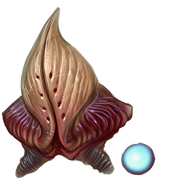 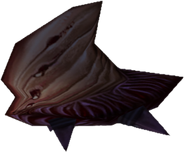 Add a photo to this gallery
Retrieved from "https://metroid.fandom.com/wiki/Seedburster?oldid=218854"
Community content is available under CC-BY-SA unless otherwise noted.