2-5 times the damage of either a normal Missile or Super Missile.

Allows Samus to fire up to 5 Missiles simultaneously.

The Seeker Missile (シーカーミサイル Shīkā Misairu) upgrade, previously known as the Seeker Launcher (シーカーランチャー Shīkā Ranchā) allows Samus Aran to simultaneously fire up to five normal Missiles at up to five targets. Seeker Missiles can also be used to fire more than one Missile at each target. It first appeared in Metroid Prime 2: Echoes.

The Seeker Launcher once belonged to a Luminoth champion. It is obtained at the Hall of Honored Dead in the Temple Grounds, below the Great Temple after defeating the Boost Guardian. The upgrade lies within a glass container, which cannot be breached by any weapon in Samus' arsenal; instead, she must use the various Spinners around the room in order to rotate corresponding rings in place on the floor, surrounding the container, after which a large circular structure will rise up around the container, with panels that amplify beams of red light coming from the eyes of Luminoth statues around the room. These rays will concentrate upon the glass, causing it to glow and then shatter.

The Seeker Launcher is not often required for combat purposes in Echoes, but it is necessary for Samus to open certain locking-mechanisms on doors such as the Multi-Lock Blast Shields and other environmental obstructions that require simultaneous use of Missiles.

Samus is also able to obtain the Seeker Missile in Metroid Prime 3: Corruption. It is obtained in Xenoresearch B, Eastern SkyTown. Similarly to Echoes, the upgrade is within a containment unit. To access it, Samus must remove an Energy Cell from its port next to the unit, which also removes the Xenoresearch lab's primary power and releases numerous captive Phazon Metroids. This enables Samus to destroy the glass container with Missiles and access the upgrade.

The Seeker Missile can harm Helios in his disk form and is used to open Multi-Lock Blast Shields and locks on SkyTown and other areas by destroying several locks simultaneously. Several other enemies also can be defeated through use of the system. Notably, it is somewhat harder for all the Missiles to hit the desired targets in the game, as Corruption uses a different Missile type than in the previous game.

The origin of this Seeker device is unclear: whilst the Space Pirates were using the Laboratories there at the time, the technology could have been developed by the Elysians, or been the result of a Luminoth - Chozo trade , which the Pirates came across and examined. The Pirates could not have taken the device from Aether due to it being contained.

In Metroid: Other M, Samus obtains the Seeker Missile again and uses them much like she did in the Prime series games, while being the first non-Prime game to feature the item. However, unlike the Prime Seekers, Other M's Seeker is actually an upgrade to the Super Missile that fires up to four regular Missiles to the secondary targets. They are obtained by defeating the Rhedogian (which was actually using the upgrade against Samus) in the fourth encounter with the creature in the Biosphere's "confrontation room". After its death, the item appears in glowing orb form.

In order to fire the Seekers, a Super Missile must be charged; afterwards, it may lock onto up to five different targets as long as four other targets are within view. Like in the Prime series, the weapon can open Multi-Lock Blast Shields.

Samus can also fire up to four missiles in Metroid Prime Pinball, though they do not lock on and move faster, like the normal Missiles in that game or the 2-D games.

A similar ability, the Storm Missile, appears in Metroid Dread. The Storm Missile allows Samus to target multiple opponents and fire a barrage of homing missiles. However, this ability fires 3 missiles at each target instead of only 1, for a total of 15 missiles maximum. 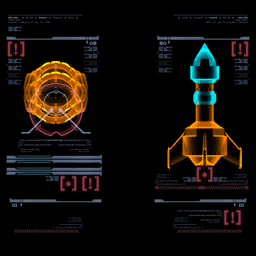 The Seeker Launcher allows you to fire upon multiple targets simultaneously with the Missile Launcher.
Press and hold

to charge the Seeker Launcher. Press

to return to Beam mode.

Using freelook, move the targeting reticule around your area. You will lock on to each enemy you pass over, to a maximum of five targets.
You can also lock onto single targets multiple times with the Seeker.
Seeker Missiles fired with a lock-on will home in on their targets.

"If you press and hold A until the Charge Gauge is fully charged, you'll lock on multiple targets. Release A to fire a Super Missile along with four normal missiles toward up to four additional targets." 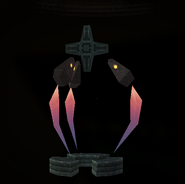 The Seeker Launcher in Echoes.

Samus targets the nodes of a Multi-Lock Blast Shield.

The Seeker Launcher being used by Player 1 in a Multiplayer match (via hacking) of Metroid Prime 2: Echoes Multiplayer.

Obtaining the Seeker Missile in Corruption.

Samus locks on to a Multi-lock Blast Shield in Corruption.