Senjoo are a species found on SR388, seen in Metroid II: Return of Samus.

Senjoo are one-eyed and have spines sticking out of their bodies; the two lowest spines have spiky rings around them, which the creature will spin continually. They fly in odd, diamond-shaped patterns, and prove to be particular nuisances when Samus is trying to climb walls with her Spider Ball in the areas where they reside.

"Spinning the rings on its side, this creature floats in the air and attacks at a perpendicular angle." 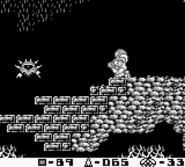 Metroid: Samus Returns Artbook
Add a photo to this gallery
Retrieved from "https://metroid.fandom.com/wiki/Senjoo?oldid=256535"
Community content is available under CC-BY-SA unless otherwise noted.