The Ship Grapple Beam is a gunship-mounted Grapple Beam that allows Samus Aran's Gunship to pick up and drop heavy objects in the environment via a Ship Grapple Point. These objects can then be relocated for various purposes. This function is regulated by the Command Visor. While the Ship Grapple is engaged, Samus' gunship cannot complete other tasks; issuing a command will compel the ship to drop its cargo before proceeding with the assigned function.

The Ship Grapple is acquired on Elysia. It is used to assemble and deliver a Theronian bomb to drop on Elysia's Leviathan seed shield. It is also later used to relocate an inexpediently placed Energy Generator on Bryyo, and a giant Bryyonian Golem head. This is the last upgrade acquired for Samus' ship. Objects that shimmer grey can be picked up with the Ship Grapple. 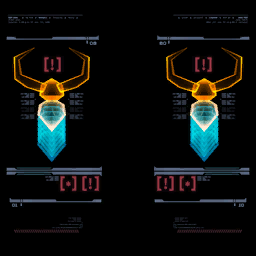 The Ship Grapple Beam will allow you to pick up and move large objects.
While in Command Visor, lock on with

to a Ship Grapple Command Icon, Depending on the icon. you may be able to lift or drop objects in the environment.

Your gunship will be unable to use all other abilities while carrying cargo.
Using another Command Icon while carrying an object will prompt you to return your current cargo to its original location. If you confirm the new command, the cargo will automatically be returned to where it was first found.
Objects in the environment that shimmer can also be grappled with your ship.

The Ship Grapple is used on Bryyo to lift a large battery as part of a side quest.