Wikitroid
Register
Don't have an account?
Sign In
Advertisement
in: Articles with non-canonical information, Gunship Features, Missiles,
and 2 more
English

Destroys enemies and artificial objects within the room.

To destroy Maldium and the Leviathan Shield Generators on Bryyo.

The Ship Missile is a concussive weapon used by Samus Aran's Gunship.

Ship Missiles are mostly used in Bryyo for destroying a Space Pirate construction site, another destroying a Maldium barricade, and the two Leviathan Shield Generators. It is also used once in the Pirate Homeworld to destroy a Maldium door leading to the Leviathan Seed. The Missiles can also be used in any open field to attack enemies.

Though it is capable of killing any kind of enemy on a single Bombing Run (including the Berserker Knight), this weapon cannot damage creatures in Hypermode or Space Pirates with their shields up. The Missiles do not need to actually hit the enemy in order to kill them. However, they may take cover under buildings (most noticeable in Cargo Dock B).

If no enemy is present in an area where the Ship Missiles can be used, the Command Visor will say there is no valid target.

In Metroid Prime: Federation Force, Samus assists the Federation Force during the battle against the Rohkor Beetle using Ship Missiles. At the end of the battle, she fires some at the Beetle's underbelly when it tries to trample the Force.

The Ship Missile reserves do not replenish whenever Samus returns to her Gunship, as the rest of her Energy and Missile ammunition would. As a result, Samus must locate Ship Missile Ammunition out in the field in order to restock her Gunship. Such ammunition can only be located in destructible containers.

In Nintendo Land, Missiles are a weapon used by player Miis controlling the Gunship with the GamePad. They are used by fully charging up a normal shot. They fire in a straight line and create a large blast radius upon exploding. Enemies will try to flee the blast radius if they are not already caught in it. Missiles can be upgraded with the Ice Charge Shot, which deals no damage but can freeze enemies in place, which is crucial for fighting Metroids.

A Missile is also available as a prize for the Nintendo Land Plaza, which can be randomly unlocked by spending coins in the central tower's pachinko game. 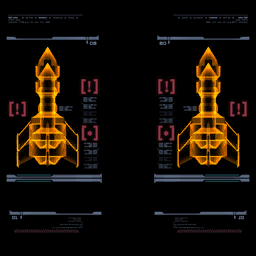 Your gunship is now capable of firing a salvo of Missiles.
While in Command Visor, lock on with

to a Ship Missile Command Icon. Your gunship will fly over the area and bombard the environment with Missile attacks.

Ship Missiles can destroy objects made of Maldium.
Each Gunship Missile Expansion you find will increase the number of Missiles your gunship can carry by 1.

"The Gunship's missiles have a huge blast radius, so they're useful against players who like to hide. Just make sure you don't get caught in the blast yourself!"