Please help improve this by adding Ridley's info by expanding it.
Much more information can be added to this article.

The Side Smash Attack[1] is an attack used by all characters in the Super Smash Bros. series. It is a reasonably powerful attack that is directed forward, and achieved by holding certain buttons for a few seconds. Samus Aran, Zero Suit Samus, Ridley, and Dark Samus each have their own Side Smash Attacks.

Samus's suited Side Smash Attack, the Cannon Lunge[2] (ガンポッドナックル?)[3], has her thrust her Arm Cannon forward, dealing quick knockback and between 12-15% damage. This is her suited Side Smash throughout the series in her suited form. In Super Smash Bros. for Nintendo 3DS and Wii U, a small blast of fire will emanate from the Arm Cannon during this attack. It can also be angled. Dark Samus's Side Smash Attack is presumably identical to the Cannon Lunge.

In Super Smash Bros. Brawl, Zero Suit Samus's Side Smash Attack is a quick, rather weak slash with her Plasma Whip that deals 14% damage. In Super Smash Bros. 4, Zero Suit Samus's Side Smash is changed to accomodate her Jet Boots. In the new attack, Samus will spin around and kick, and then follow through with a second kick after the spin. The first kick deals 5% damage, and the second 11%. At high damage percentages, this attack is a reliable killer.

An update for Ultimate on January 29, 2019 shortened the launch distance that Zero Suit Samus sends opponents when her attack hits the middle of their body.

Damage 12~14%
Samus jabs her arm cannon into your opponent to blast that opponent. You can angle it up or down.

Samus's Cannon Lunge in Wii U. 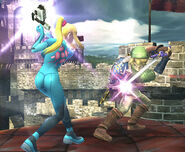 Zero Suit Samus about to use her Side Smash on Link.

Ridley's Side Smash in Ultimate

Dark Samus about to use a Side Smash in Ultimate

Retrieved from "https://metroid.fandom.com/wiki/Side_Smash_Attack?oldid=267023"
Community content is available under CC-BY-SA unless otherwise noted.