Jumps back and forth, can defy gravity and jump about on the ceiling

Similar to Baristute and Dessgeega, implied relation in Other M concept art

Jumps at and onto prey

"Vs. Mid-Level Enemies"
The Sidehopper[1][2] (サイドホッパー, saidohoppā?), alternatively written as Side Hopper[3][4][5], is an enemy in the Metroid series, first appearing in Metroid.

The common Sidehopper is as big as Samus Aran and has a pair of powerful, piston-like legs enabling it to perform great leaps, and two enormous mandibles hanging directly beneath its large, round eyes. Sidehoppers have the strange ability to repel gravity; they can not only cling to the ceiling, but also jump from it then "fall" upwards back onto it. The majority of Sidehoppers are weaker than their evolved "relatives" from Norfair with the exception of the rare, blue variant found only in Tourian (vulnerable to nothing but Super Missiles).

In their original incarnation in Metroid, Sidehoppers, like many enemies in the game, had two different forms: one pale orange with a green head, the other vermillion with a blue head. The vermillion ones were more resilient and powerful than their cousins. In Super Metroid, there were three variations of these creatures: Small Side Hoppers[6] (most likely juveniles), normal-sized, and the previously mentioned powerful, armored variant called Blue Sidehoppers. Small Side Hoppers have a 33% chance of dropping Missile Ammo, and while they are weaker than their adult counterparts, they still attack with much power.

In the remake Zero Mission, another further evolved creature related to the Sidehopper was introduced, the Baristute. These creatures were stronger than both the Dessgeega and Sidehopper species in the game. Metroid: Other M concept art reveals that the Sidehopper, Dessgeega and Baristute are an evolutionary line; it is unknown what triggers this evolution. The Nintendo Official Guidebook for Metroid Other M reiterates this concept, stating that Sidehoppers, Dessgeegas, and Baristutes are part of a Sidehopper species (see official data below).

Sidehopper specimens were present on the Biologic Space Laboratories research station in Metroid Fusion, and were infected when the research station fell to the X parasites. The hosts' DNA was modified by the X so that the resulting Sidehoppers developed thrusters at the bottom of each leg, added resistance to attacks, and more prominent teeth. It is interesting to note that Sidehoppers are found in the desert/volcanic habitat of Sector 3 (PYR), instead of Sector 2 (TRO) where one would expect to find them since they are native to Brinstar's jungle. Additionally, Dessgeegas, who live in volcanic areas, are found instead in the tropical Sector 2 aboard the BSL station. The X Parasites are known to modify the abilities and DNA of their victims, which might explain this change of natural habitats.

In the original game, Sidehoppers were very dangerous, the most powerful enemies in Kraid's Lair, particularly the brown variety and the ones that walk on the ceiling. It is best to dispose of a Sidehopper with a blast from Samus' Missile Launcher or Screw Attack if available; to avoid confrontations, freeze them with the Ice Beam and flee.

Sidehoppers remain dangerous opponents in all their subsequent appearances, thus maximum firepower is advised. In Metroid Fusion, all X-infected Sidehoppers are more armored than their normal counterparts, making them immune to uncharged beams.

In Other M, they are capable of releasing a shockwave when they land from their jumps, increasing their attack range.

"These powerful enemies attack Samus while hopping. Be careful, the Side Hopper's strength is second only to the Mini-Boss. Destroy him with one missile blast."

"This tough new enemy hops and jumps when attacking."

"It attacks Samus with a double-jump movement pattern."

"As their name suggests, these arachnid creatures jump from side to side and chase you when you're near. They're also quite strong so use rockets or charge when possible."

Mid-Level Enemies (pg. 10)
Side Hoppers, Dessgeegas and Barisutes
"These strange bipeds are resilient creatures with one very glaring weakness, their head. Though larger and stronger than you, the Side Hoppers, Dessgeegas, and Barisutes are far slower than you. They stomp around, usually knocking you down or crushing you under their clawed feet, and can chomp at you with their pincers. To destroy them quickly, weaken them with Charge Beam shots and finish them off with Overblast attacks. The Side Hopper is the weakest of the bunch. Dessgeegas are slightly stronger, and Barisutes are the strongest of them all."

"Sidehoppers are somewhat large bipedal creatures. Their forte is their charge attack. In Sector 2 is the Baristute, and Sector 3 is the Dessgeega, which are in the same series."

Cameos in the Prime series[]

In Metroid Prime, the Biohazard Containment room on the Frigate Orpheon contains a roaring inhabitant and a shaking door. Scanning the unit reveals images of a very Sidehopper-like creature, though no name is provided. The fate of this creature after the crash is mysterious, as its cell will later burst open with Aqua Reapers after passing through the area once before, which does not produce a body despite the door apparently remaining locked; most likely, the Aqua Reapers had already consumed the creature by the time Samus arrived. The scan on the Frigate reads: "Specimen Solitary Holding 1. Phazon level >> Unknown. Status >> Xenotropic life-form unstable. Use caution."

In Echoes, there is a multiplayer arena named "Sidehopper Station". Appropriately, it is also shaped like a Sidehopper. The stage is based on the Frigate Orpheon, and is likely a reference to the cameo in Prime. 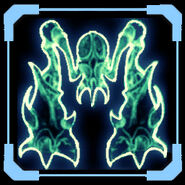 The scan image of the creature.

Side Hopper artwork from Metroid

Previously unreleased artwork of a Side Hopper from Metroid Mission Logs

Animated Side Hopper sprite from Metroid

Both Side Hopper sprites in the original Metroid. 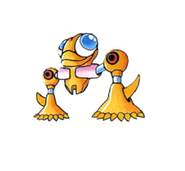 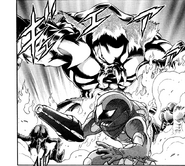 A Sidehopper in Zero Mission

Sidehopper in Metroid: Other M

Official screenshot of Samus performing an Overblast on a Sidehopper