Wikitroid
Register
Don't have an account?
Sign In
Advertisement
in: Pages with conjectural titles, Rooms, Main Sector, Rooms with Desbrachians

The "Sidehopper hall" is a room in the Main Sector. It appears in Metroid: Other M.

This is a straight walkway that connects the rest of the Main Sector to the Main Elevator that leads to Sectors 1, 2, and 3. It has very simple architecture: several forward-facing buttresses lining the walls, a railing in front of them with blue lights in between each buttress, blue fluorescent lights on the ceiling, and a black-colored floor. Notably, several sections of it on either side are transparent and covered with panes of glass that have a hexagonal pattern across them.

In the center of the room, the railing on the right curves into the wall and stops beside a Desbrachian gate, which cannot be opened on the first visit as Samus is not authorized to use her Power Bombs.

When Samus enters the room for the first time, the door to the Main Elevator is locked and there are two Bulls in the room. As she moves closer, two Sidehoppers appear out of nowhere (as there is nothing in the room for the Sidehoppers to emerge from). Although an on-screen tutorial for the Overblast is given in the slender walkway previously, it appears on-screen again here as the game encourages Samus to dispatch the Sidehoppers with Overblasts. Once they are defeated, three more Sidehoppers spawn approximately six seconds later and Samus is required to kill them as well. Once they are dead, Samus can enter the Main Elevator room.

On her return to the BOTTLE SHIP during the post-credits sequence, Samus can continue her journey to Adam's helmet through this room. Once she returns from the Cryosphere via the Main Elevator (or another sector if she has decided to collect expansions), she can use a Power Bomb in this room to summon the Desbrachian and destroy it. Through the gate, she will find a corridor leading to an elevator to the Control Bridge, where she encounters Phantoon for a second time. If the save file is reloaded after completing the post-credits quest, the Desbrachian will remain dead.

Note: "There is another circular hatch in this long corridor that you cannot access just yet. Make a note of it, but don’t worry about it for now."

Page 141
"Leave the Main Elevator room and explore the halls leading back toward the docking bay. Find the dormant Desbrachian on the right and wake it with a Power Bomb. Defeat it quickly, then proceed through the hatch on the right." 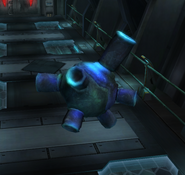 A Bull in the room.

Samus running into the hall.

The door when it is locked.

Samus uses a Lethal Strike on the Desbrachian.
Community content is available under CC-BY-SA unless otherwise noted.
Advertisement