"Simians" are a race of large ape-like humanoid. They apparently face discrimination from the rest of the Galactic Federation. This, according to a captured Space Pirate that was dubbed "P-1", is due to them being considered primitive compared to most other humanoids. P-1 states that the Chozo, particularly Platinum Chest, had recommended the species to the Federation.

Commander Mauk is a "Simian" and the only known example of one in the Metroid franchise. 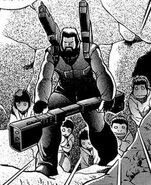 Retrieved from "https://metroid.fandom.com/wiki/Simian?oldid=271788"
Community content is available under CC-BY-SA unless otherwise noted.