The single-block-wide bridge is a room in Norfair. It appears, with differences between versions, in Metroid and its remake Metroid: Zero Mission.

This room serves the same role in both games. It connects between rooms in the lower areas of Norfair, including the corridor leading to the Wave Beam.

In the original Metroid, the shaft is composed of green bubble-like tiles. Initially, it appears to be a small square-shaped room with a bubble bridge over a pool of lava. If Samus lays a Bomb on the block directly underneath the door, a hidden tunnel opens up in the floor, allowing her to get under the bridge. The lava turns out to be false, although a Dragon inhabits it as though it were real lava. A door to the Wave Beam access corridor is found directly under the lava. It is possible to Bomb through part of the floor on the lower right, but it does not lead anywhere.

In Zero Mission, the room's appearance has been somewhat changed. The walls and ceilings are now made of "glass bubbles". Other "bubbles", or clusters of some sort of nuclei, are visible in the background with a purple hue. A larger section of the floor is now destructible, and there are more and different enemies beneath. The lava now disappears when entered as though it were a mirage. As with the original game, Samus accesses the Wave Beam corridor through this room.

As the Wave Beam is an optional item in both games, it is not necessary for Samus to collect it, particularly on Low Percent Runs. Therefore, she can simply run through this room without going underneath the floor.

Page 107
"When you exit the blue door over here, place a bomb on the ground below. When you go through the lava, there will be a new cave."

023 WAVE RUN (pg. 133)
"When you get to the single-block-wide bridge over lava, blast the block closest to the left hatch with a Bomb. After you drop, roll to the right and drop through a layer of false lava to a lower level. Make your way to the left from there and uncover the strong but unpredictable Wave Beam."

142 FALSE LAVA FALL (pg. 59)
"After you record your progress, run one room to the left and blast through the floor. You'll fall into what looks like lava but turns out to be an illusion. Drop the bottom of the short shaft, then proceed to the left."

The entire room in Metroid.

The entire room in Zero Mission. 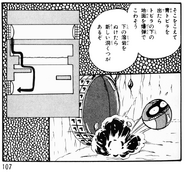