SkyTown is a research station in the upper atmosphere of Elysia created by the Chozo and populated by Aurora Unit 217 and a small army of maintenance drones. It is the fourth area explored in Metroid Prime 3: Corruption. It is connected to the Eastern SkyTown by a Skytram.

The area's aesthetics draws strongly from the steampunk style.

The history of SkyTown begins 1500 years ago. Built by the Chozo as a deep-space research facility, SkyTown is a vast network of floating research pods that act as a protective "Web" high above the surface of Elysia. Realizing that maintenance was using up valuable research time, the Chozo created a race of artificially intelligent robots to aid in upkeep, whom they appropriately named the "Elysians". 1051 years ago, the Chozo departed Elysia, leaving the Elysians to continue searching the stars. For the next 200 years, the Elysians continued to monitor the deep space telemetry, until they ran critically low on fuel and materials, at which point they entered a state of hibernation. During this time, they continued to analyze data in the form of "dreams". This is how they witnessed a Leviathan impact the planet Tallon IV.

After 835 years (16 years prior to the Leviathan impact), the city's defense systems detected the approach of a Galactic Federation ship (or ships). As the Elysians awoke and prepared to defend SkyTown from a possible threat, the GF ship(s) communicated with the Elysians and declared peace. Soon after, The Treaty of Elysia was drafted, and the humans brought much needed fuel and parts to SkyTown, in exchange for access to the city's research instruments and databases. Eventually, Elysia's atmosphere was deemed too harsh to survive in, so the Federation installed Aurora Unit 217 to maintain control of SkyTown's network. This gave the Elysians access to the Aurora Unit database, and all the information therein.

The Federation and the Elysians of SkyTown collaborated to avert many disasters and thwart many enemies until five months ago, when the city's systems detected a Phazon meteor striking another planet. At this point, all resources were directed towards finding the source of these meteors, which was discovered one month ago. Unfortunately, soon after this discovery, AU 217 was corrupted with an unknown virus that had infected the AU database, severing all communication with the Galactic Federation. A week after that, SkyTown's sensors detected several Phazon meteors, one of which was heading straight for Elysia. The impact destroyed a large portion of the city, and began corrupting the entire planet. Not long after, the city was invaded by Space Pirates, and by two weeks, the Phazon corruption had spread to the Elysians, causing them to go rogue. Bounty Hunter Ghor was sent to help the Elysians by restoring Aurora Unit 217, but was also infected and joined the Pirates. Soon after, Samus Aran was sent by the Federation, and managed to restore 217, defeat Ghor, destroy the shield protecting the Leviathan by dropping a Theronian Bomb (as well as a section of the city) on it, and destroy the Leviathan, thus stopping the Phazon from further corrupting the planet and eliminating the Space Pirate presence there.

Daily life of the Elysians of SkyTown involves city maintenance and transportation of materials and fuel to various pods of the city, while AU 217 analyzes information collected by the city's research instruments.

Jack Mathews, the technical lead for Corruption, attempted to have the SkyTown concept scrapped when it was shown to him, as he believed it would not run well at 60 frames per second. According to him, "We had to write a bunch of tools to support it and make the artists jump through a bunch of hoops."[1]

The nature of SkyTown - where pods of other rooms are visible in the background - caused Mathews to doubt it could function well. Taking his feedback into account, the art and engineering teams at Retro Studios created individual pods in the backgrounds of each room as LoDs. This way, the player would remain unaware since they would have to progress through interior rooms to reach them.[2] Mathews was ultimately proud of what the Retro Studios team accomplished, and SkyTown as it resulted.

Kynan Pearson worked on event planning for SkyTown, and ensuring that each pod was unique and memorable. He concurred with Mathews' recollection of the challenge in ensuring SkyTown could run at 60 FPS.[3]

Based on concept art, it appears as though SkyTown was originally intended to hover over a landmass instead of being in the atmosphere of a gas giant. 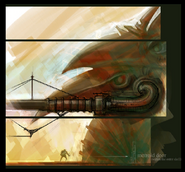 Concept art of a Chozo Statue

Concept art - The Leviathan is visible in the background.

Samus lands in Eastern SkyTown. Main SkyTown is visible in the background.

The SkyTram, a mode of transportation between SkyTown and Eastern SkyTown.