[1]
The Sky Temple on Dark Aether is the evil, twisted version of the Great Temple. It is where the Emperor Ing awaits Samus at the end of Metroid Prime 2: Echoes. After Samus defeats the Emperor, she takes the last of the energy sustaining Dark Aether and must battle Dark Samus in the Sky Temple Gateway (located in the Grounds below the temple) and escape before the dimension collapses.

The exterior of the Sky Temple bears little aesthetic resemblance to its counterpart on Aether, incorporating the Ing architectural mainstays of black stone and Ingworms. The Temple is also isolated from the ground in that it seems to float high up in the air, accessible only by a Light Shaft (maps show that it floats higher than the Ing Hive Summit); unlike its Aether counterpart, the Sky Temple has no elevators leading up to it. Finally, the layout of the Sky Temple itself is upside-down compared to the Great Temple. 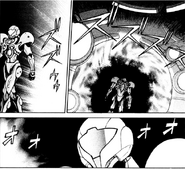