The Sky Temple Energy Controller is the first room in the Sky Temple. It appears in Metroid Prime 2: Echoes.

This room is the first room in the Sky Temple. It contains the final Energy Controller in Dark Aether. Samus Aran enters the room by riding on a beam of light into the Energy Controller using the Light Suit. Once she does, the Emperor Ing, currently in liquid form, steals the remaining planetary energy and takes it to the Sanctum. There is a Save Station in the upper part of the room. The Aether version of this room is the Main Energy Controller, although due to the inverted nature of the Sky Temple it actually occupies the same space as the Temple Sanctuary.

During the escape sequence, the Save Station here can no longer be used, apparently due to a "power overload". When scanned, the Scan Visor will advise Samus to "Seek another Save Station", despite that being impossible for what little remains of the game.

Save Station (Prior to Emperor Ing fight)
"Save Station
Step into these stations to save your game and fully restore your energy."
Save Station (During escape sequence)
"Object analysis complete.
Save Station is offline.
Power overload has decommissioned this unit. Seek another Save Station."
Ingworm Cache
"The Ingworms wrap their bodies around useful items to protect them. They are defenseless. They are not terribly durable and have no form of attack, hence their assignment as storage bearers by the Horde."
Light Hologram
"Teleport system active. Step into hologram to initiate teleport." 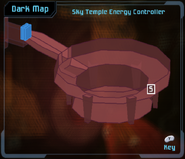 Room seen on the Map.
Community content is available under CC-BY-SA unless otherwise noted.
Advertisement