Varies (human-sized in early media, large in other media)

Ridley
Judge Racklas
Greed
Space Dragon[1][2] refers to pterosaur-like sentient beings that are alluded to in the Captain N: The Game Master comic Breakout, as well as the manga Metroid EX. Both of these sources are not considered canon. Ridley, a common antagonist in the Metroid series, is the only purported individual of the species to appear in the canon of the series. Whether he is canonically part of this race is unknown.

In the files for the original Metroid, there is an unused fake Ridley which may have been a weak member of Ridley's race impersonating him. However, this enemy does not appear in the finished game, nor was it incorporated into the game's remake; therefore, it has never been considered canon.

Breakout introduces a judicial member of this race, Judge Racklas. It is said by Mother Brain that every member of the species looks alike, which was how in the comic Ridley and Racklas were easily switched in their plot to imprison Princess Lana and Samus Aran. Both Racklas and Ridley take the latter's physical appearance from concept artwork for the original Metroid, which was the only Metroid game in existence at the time.

The end of Samus & Joey introduces a new villain, Greed, who appears nearly identical to Ridley. In the series' continuation, Metroid EX, Greed reveals that he wants revenge on Samus because she "utterly destroyed" his race. He elaborates that they were once the rulers of the Space Pirates, a position they had held for ages. Samus quickly infers that he is of the same race as Ridley, and is seeking revenge for Ridley's death during the events of her raid on Planet Zebes. This may imply that, with Ridley dead, he is the only Space Dragon alive.

In the Metroid Blast attraction of Nintendo Land, Ice Ridley appears as one of the Assault Mission bosses. During mission 28, Ice Ridley teams up with the original Ridley, implying that they are two separate characters rather than different forms of a single character. However, this may also be excused by Ice Ridley and Ridley being animatronics, rather than true Space Dragons, and therefore them appearing together is simply artistic license for the theme park.

None of the examples above are considered part of the official Metroid canon. However, there are some implications that Ridley is part of a species in the overall story. In Metroid: Other M, the clone of Ridley is shown to have a three-step metamorphic life cycle, first as a small birdlike creature, then a large lizard, and finally his iconic dragon form. Presumably, this life cycle is shared by other individuals of the species. Ridley is referred to as "geoform 187" in Metroid Prime, which may be a designation for this species.

Aside from Ridley and his clone, the only Space Dragons that appear in canon are imitations. Mecha Ridley is a robot that Ridley built in his own image to display his power. Neo-Ridley is an X Parasite that adopted a heavily-distorted form in Ridley's likeness after absorbing the genes of his deceased clone.

The Metroid manga hints at the Chozo having an unknown history with Ridley's race.[citation needed] 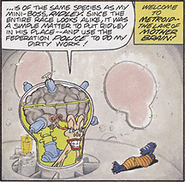 Mecha Ridley, a robot built in the image of a Space Dragon 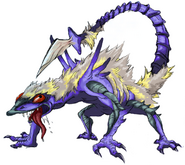 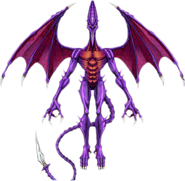 Retrieved from "https://metroid.fandom.com/wiki/Space_Dragon?oldid=274218"
Community content is available under CC-BY-SA unless otherwise noted.