Wikitroid
Register
Don't have an account?
Sign In
Advertisement
in: Pages in need of images, Boots, Kraid's Lair,
and 10 more
English

The Space Jump (スペースジャンプ, Supēsu Janpu?) is a highly advanced Chozo-designed movement system that allows Samus to Spin Jump repeatedly in midair. It is an upgrade for the Power Suit that debuted in Metroid II: Return of Samus, and has appeared in every 2D game since. It's chronologically first discovered by Samus Aran during the events of Metroid: Zero Mission.

In the main series[]

The speed of the Spin Jump generated by this upgrade is extremely quick, making Samus's crouched appearance during these jumps blurred. Samus can scale any height with this upgrade (with the exception of narrow red spikes), and in combination with the Screw Attack, this upgrade becomes a deadly weapon. In the first two games it appears in, the jump button must be tapped rhythmically in order to continually jump, making it hard to lose height while space jumping. In later games though, tapping the jump button any time after the peak of the last jump will result in a Space Jump.

In Metroid: Zero Mission, the Space Jump was given as an Unknown Item and its functionality was not usable until Samus completed the Ruins Test.

In Metroid: Samus Returns, the upgrade is obtained in Area 4 after Samus escapes the Diggernaut which spits out the Item Sphere containing the Space Jump after assuming it has killed Samus with its drill arm, unaware she had used the Morph Ball to hide safely in a hole in the wall. It is implied that this Item Sphere was originally held by the destroyed Chozo Statue that Samus encounters shortly before she is confronted and chased by the Diggernaut's drill arm. Unlike in other 2D games, the Space Jump in Samus Returns curiously lacks the blurred motion and has her spin jumping normally.

In Metroid: Other M, Samus has the Space Jump and Screw Attack by default, but does not use them or many of her other power-ups until authorized to by Adam. She self-authorizes both items when they become necessary to cross a chasm after a bridge over it was retracted. While Samus is still capable of limitlessly jumping in mid-air, she cannot gain altitude. Space Jump also slightly increases her jump height similar to the High Jump Boots.

It returns in Metroid Dread, as confirmed by the Overview Trailer. It is acquired in Ferenia, acting as a successor to the Spin Boost. Unlike in previous games, the Space Jump functions underwater before obtaining the Gravity Suit, but is only able to maintain the peak height of the first spin jump; metal buoys in the background hint to where the Space Jump can be used underwater. Like Samus Returns, the Space Jump in Dread lacks the blurred motion and instead Samus flashes white as a jump effect appears underneath her. If Samus Space Jumps above the surface of water, the resulting visual effect appears as though she is "bouncing" off of it.[1]

In the Prime series[]

"With this item Samus can jump continuously through the air while spin jumping. Learn how to use this item effectively by hitting the jump button again before she touches the ground and Samus will be able to do a perpetual jump. It may require some practice, but keep trying!"

"With the Space Jump Boots, Samus can jump continuously in the air and fly through open areas. To operate this item, press the jump button just after Samus peaks in a somersault jump."

The Space Jump (page 63)
"A handsome prize for defeating Draygon - the Space Jump gives you near super human powers."

"Perform consecutive Spin Jumps. With practice, it's possible to use the propulsion to "fly"."

"Somersault continually in the air. Use A mid-somersault to jump again."

"Gravity is no match for the Space Jump, an ability that allows Samus to leap continuously in the air without touching the ground."

"Press 2 during a spin jump to perform another spin jump. Note: If you continue to press 2, you will continue to space-jump."

"The Space Jump allows you to jump repeatedly in midair. Spin Jump and then press [B] at the right time to jump again." 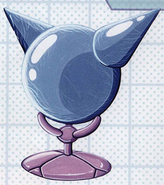