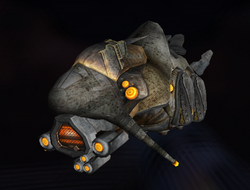 Space Pirate Armored Tactical Carriers are heavily armored Space Pirate assault craft seen in Metroid Prime 3: Corruption. They are used to transport troops and to mount attacks against heavy targets, but are not designed for long-term engagements. Their armaments include heavy Tribeam cannons. Their only weak point is a heat vent at the front of the carrier. They were built as an upgrade to the "Shrike" Class Assault Skiff, and are more powerful, yet slower.

ATCs were first encountered by Samus at Norion, and she managed to destroy one before being ambushed by four more. Rundas arrived to destroy them all with little effort using his ice powers. Samus later engaged more ATCs at Bryyo, which was where they were most frequently seen during Samus' mission. Several appeared later at SkyTown, Elysia to carry Troopers around the city. None, however, appeared on the Pirate Homeworld, as most of the areas Samus explored were enclosed rooms.

A modified ATC has been built, the Assault Skiff. This unit boasts more power and strength than the ATC, but can no longer fire rapidly or carry troops.

A similar material to the armor of the ATC seems to have been used as the exterior of the Space Pirate Boarding Pod. 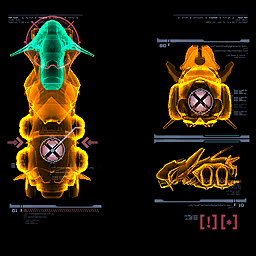 The Space Pirate Armored Tactical Carrier (ATC) is surprisingly well built and armored. A forward-mounted heat vent is its only vulnerable spot. Tribeam cannons help the unit deal out damage while on missions as well. Designed for rapid transit to and from hot zones, the unit is not designed for long-term engagements. It has a relatively small fuel supply, a sacrifice made for heavier armament and armor.

Pirate Troopers emerge from an ATC.

Samus prepares to attack an ATC at Norion.

Samus fires at an ATC.

An ATC attacks Tinbots on Elysia.

A Pirate ATC arrives to drop off Pirate Troopers into battle at Bryyo Fire
Русский
Community content is available under CC-BY-SA unless otherwise noted.
Advertisement