Space Pirate Assault Skiffs are modified ATCs equipped with a powerful tribeam cannon to support ground troops. The Assault Skiff usually uses hit-and-run tactics. It is faster and stronger than the ATC. Unlike the ATC, it is not made to carry troops, and benefits in speed from the lack of crew space. The weapon below the heat vent can no longer fire separate beams, and needs to be charged to before it can fire.

Samus encounters three Skiffs when defending the Theronian bomb aimed at Elysia's Leviathan. The Skiffs attack the Spire Pod with their cannons, causing considerable damage to its structure. If the Spire is destroyed, Samus will die. They appear alongside Pirate Troopers, who will distract Samus from concentrating her fire on the Skiffs. They are very powerful, but share the weakness of the ATC; the front vent is vulnerable to weapons fire.

One can be briefly seen in the sky over the Bryyo Thorn Jungle's Field Access when Samus enters the room for the first time. It will pass overhead and will not attack. It can be scanned for a brief period. A crashed Assault Skiff (presumably the one seen earlier) can be found in the Jousting Field (the room where the Korakk boss is fought), after the Leviathan's Western Shield Generator is destroyed. Scanning the "downed spacecraft" reveals it was caught in the shield generator's explosion. It is found alongside a confused Advanced Pirate Trooper and a Pirate Militia, presumably survivors from the crash. The downed spacecraft will stay there for the remainder of the game.

Crashed (Jousting Field)
"Crashed vessel appears to have been caught in the explosion from the shield generator." 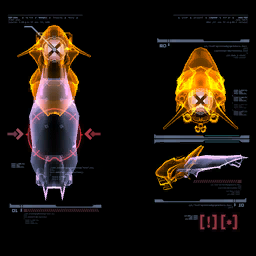 The fast moving Space Pirate Assault Skiff is used to support troops in combat. The skiff is mounted with a tribeam cannon, which is capable of firing powerful charged shots. However, the cannon itself is unprotected and can be easily overloaded. This modified version of the ATC has sacrificed durability for speed, and often employs hit-and-run tactics.

Samus fires at an attacking Skiff.
Community content is available under CC-BY-SA unless otherwise noted.
Advertisement