Space Pirate Boarding Pods are crude starships (even by Pirate standards) used to forcibly board enemy ships. They consist of a propulsion drive, cockpit, and a nose cone packed with heavy explosives. The pilot attempts to ram the enemy and detonate the explosives, trying to create a breach which the crew of the pod can enter through. However, the pod and crew are considered expendable, and they are not well-protected, leading the Boarding Pods to earn the nickname of Space Coffin.

One Pirate Boarding Pod was encountered by Samus Aran during the Pirate attack on the Olympus, and two more during her investigation of the Valhalla: The first was seen floating outside of the vessel, apparently unsuccessful, while the latter had managed to breach the Valhalla's Control Room. It was from this latter pod that Samus was able to obtain the Leviathan Command Codes. 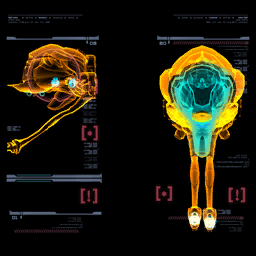 Pirate boarding pods are crude, even by their standards. They are composed of an aged propulsion drive, a cramped crew-transport module, and a nose cone packed with high explosives. The pilot guides the pod toward the target ship, then rams it, detonating the explosives upon impact in an attempt to breach the hull. If a breach is created, the crew within exits the pod.
Of course, mishaps occur. Sometimes the explosives go off prematurely, exposing the crew to vacuum. Other times the detonation fails to occur, leaving the pod to bounce off the target's hull. The shielding between explosives and crew is substandard, and often fails to protect the crew from the explosion. The pod's nickname of "Space Coffin" is well earned.