Pirate Ship is also a name used in Nintendo Power volume 164 to refer to the crashed Frigate Orpheon in Metroid Prime.

Space Pirate destroyers (called a Pirate Ship by Elben Schafers on his website) are spacecraft used by the Space Pirates in Metroid Prime 3: Corruption.

The destroyer is easily distinguished by the three massive prongs extending forward from its spiked main body. These encircle a large, front-mounted laser cannon, which can fire a beam powerful enough to destroy a Griffin-class frigate with a single shot, though it seems to take more firepower to destroy an Olympus-class battleship. The destroyer is also capable of dropping explosive energy bursts, as demonstrated when one attempted to kill Samus Aran via bombing run when she first arrived at the Temple of Bryyo.

At least five were deployed during the Pirate attack on Norion, and can be seen from the windows of the Flag Bridge aboard the G.F.S. Olympus. One appears flying over the Temple of Bryyo when Samus first enters, and drops off several Pirates before departing. Several destroyers defend Phaaze, and appear to have Phazon growths on the back of their central structure. These growths explode shortly before the blast from the planet's destruction hits them.

The ship that appears in the Temple of Bryyo is named Pirate Cruiser in the level data. 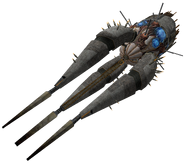