This article is about the ships from Zero Mission. For the ship from Echoes, see Space Pirate starship.

It is depicted as a green ship shaped similarly to a tadpole, horseshoe crab, or stingray. The craft has two small wings jutting out from the sides, and its tail undulates during flight. In its original appearances, it has a red bat-like marking that presumably was the Space Pirate emblem; however, this is removed in Metroid: Samus Returns.

The Escape Ship has a very similar design, although it has a simpler shape and a different color scheme.

Space Pirate vessels made their debut in Volume 2 of the Metroid manga. Their most notable appearance is participating in the battle between the Space Pirate Mother Ship and Federation Army Special Ops Battleship VIXIV IV. They also are shown invading Jamoru during the Space Pirates' attack on the planet.

The Space Pirate vessel's first in-game appearance was in Metroid: Zero Mission. In the game, several Space Pirate vessels were seen accompanying the Space Pirate Mother Ship around the time its commander, Ridley, receives the distress signal detailing Kraid's defeat. They later managed to shoot down Samus Aran's Starship just as it was about to escape Zebes upon Mother Brain's death, though Samus managed to survive the encounter and hid herself as the vessels flew over Chozodia in search of her. 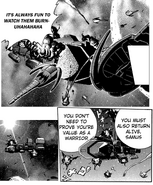